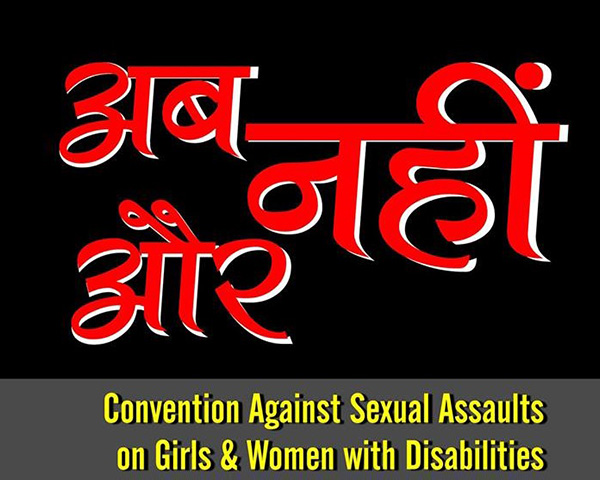 For quite some time now, the women in India have not felt very safe. They are subjected to abuse and assaults at home, at the workplace as well as the public space.

This is even more so in the case of disabled girls and women, who are unable to protect themselves or access justice.

A convention is being held in New Delhi later this month to look at ways to protect disabled girls and women better and ensure they have the mechanisms to fight such attacks.

On 25 November, experts from various fields will come together at a convention organised by the National Platform for Rights of the Disabled (NPRD).

While there are laws and provisions in the Indian Constitution to protect and provide justice to survivors of sexual assaults, lack of awareness, apathy and poor accountability come in the way of seeking and getting justice.

For the first time, the Justice Verma Committee had put these issues in the forefront. Suggestions made by disability rights groups like the NPRD had been reflection in the recommendations of the committee. Some of these also formed part of the criminal law amendments that took place subsequently. In practice, however, they have had little impact.

Implementation of the new provisions however has been faulty. Insensitiveness of the police and administration has also been a matter of concern. Procedures are not followed entirely, or when followed are faulty. All these lead to failure in the justice delivery system. One of the issues that we had flagged before the Justice Verma Committee was for the creation of monitoring systems for institutions where girls and women with disabilities are lodged. Abuse within such institutions are rampant as has been revealed in cases that have been reported recently from Muzafarpur, Bhopal etc. Murali Dharan, Secretary, NPRD

The speakers at the Delhi convention will also include survivors of sexual attacks, who are likely to share their experiences of seeking justice. The need for a convention like this arose as disabled girls and women are regularly becoming victims of sexual assault in India.

Shampa Sengupta, Joint Secretary, NPRD says the organization has tried to intervene in policy level issues apart from offering other kinds of support to survivors.

“I have been working on this issue of women with disabilities for decades and as far as I know, this is first time such a convention is being held at the national level. We hope policy makers will sit up and take notice of this issue, but for that disability sector need to give a major push jointly. This Convention will be one of the significant step towards same,” said Sengupta.