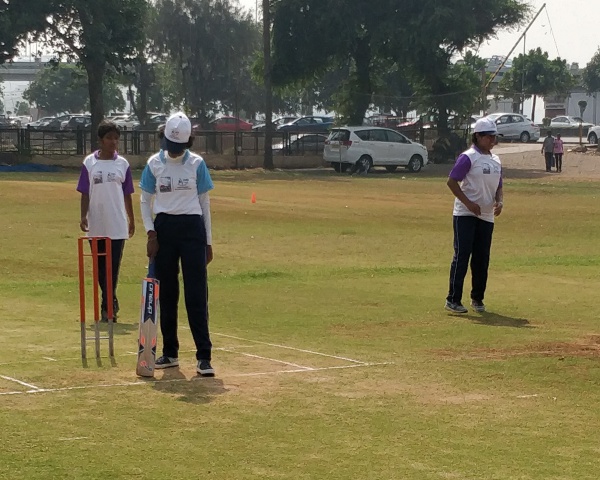 Six teams from across Maharashtra are fighting it out for top honours at a two-day intra-state tournament in Mumbai. These are division matches with female players from Mumbai, West Maharashtra, Khandesh, Marathwada, Vidardha and Konkan divisions taking part.

Their performances here are critical because the skills displayed here will decide whether they have a shot at securing a place in the Maharashtra team. Twenty-five players will be chosen for advanced training and coaching, and the best will make it to the Maharashtra blind women’s cricket team.

Among the eager hopefuls is Ganga Kadam from Solapur. 20-year-old Kadam, who has a nifty hand with the ball and bat, has aspirations of making it to the women’s national team.

I started playing a year ago and I want to prove my skills, both as bowler and batsmen. I love cricket and I aim to play for India. My parents have supported me in a big way throughout and the organisers have also been very encouraging, so I am very hopeful. – Ganga Kadam, blind cricketer

Authorities at the Cricket Association for the Blind, Maharashtra (CABM) are very encouraged by the response to starting a blind women’s cricket. Unlike the men, the former have had a slow start. It was only two years ago that the CABM started looking at cricket for women in a major way.

“We are very happy with the response. We did focus more on men, but many blind schools across Maharashtra started approaching us and we decided to look into blind schoolchildren playing cricket”, says Ramakant Satam, General Secretary, CABM. “We held a meeting with all the interested schools and found there was much enthusiasm among women as well.”

The women players taking part in the Maharashtra division matches are between 18 to 38 years. They have been coached by former blind cricketers. Those who get selected for the state team will be coached by Ajay Mone, a seasoned cricketer who has played alongside Sachin Tendulkar.

“The blind men’s team from Maharashtra is doing well under Mone’s guidance,” says Satam. “The men’s team is currently in Andhra Pradesh for the national tournament.”

The women’s matches are being watched closely by Rekha Wadekar wife of the late cricketer Ajit Wadekar, who was a mentor and major supporter for blind cricket. “I am very happy to see women playing and this is exactly what my husband would have wanted. It’s wonderful to see blind girls out on the field giving their best. I wish them all the best.”

With all this goodwill and support, women’s cricket for the blind is set to hit many sixes.