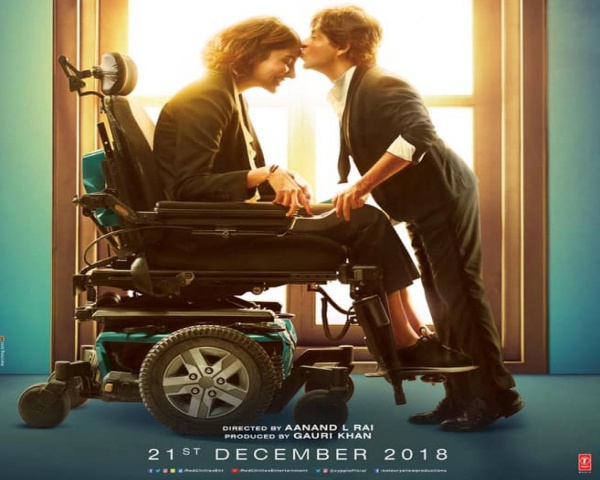 The release of the song Mere Naam Tu from the film Zero on Saturday has further whetted curiosity about this Shah Khan Rukh-produced film that has two central characters with disabilities.

The song, which also stars SRK in the lead role of a dwarf, shows him expressing his love for Anushka Sharma, who plays a person with cerebral palsy.

Zero, which is SRK’s most expensive film ever, tells the story of Bauua Singh, a dwarf from Uttar Pradesh, who finds a companion in Aafia Bhinder, a NASA scientist with cerebral palsy. What happens when a leading film star, Babita Singh, played by Katrina Kaif gets close with him, is the plot of the story.

Like all big Bollywood films, the pre-release hype for Zero has been huge. First came the trailer followed by a picture from the song Mere Naam Tu, which showed SRK kissing Sharma on her forehead. Sharing the picture on social media, SRK announced the release of the song, saying, “Bauua ka pyaar hai, Aafia ussi ke naam hai.” #MereNaamTu out tomorrow.”

The theme of the film has Mumbai-based system engineer Jasmina Khanna hooked. Khanna, who has cerebral palsy, has been following film’s developments closely since the release of the trailer.

“I am so glad to see SRK playing a role of a dwarf who falls in love with Anushka playing the character of a girl with cerebral palsy. What touched me the most in the trailer is that they have shown a different perspective of disability that is love between a man and a woman with disability. Even today in India falling in love for a person with disability is considered a taboo. A subject rarely touched upon in Indian cinema and in Indian society by large.”

For Dr Riitesh Sinha, an innovator with cerebral palsy from Haryana, the trailer shows plenty of promise. He is especially happy with the way Anushka has been shown and is convinced that a mainstream actor playing the part of a cerebral palsy patient will help spread awareness.

“The film gives the message that a person with Cerebral Palsy is a Capable Person and this being a Anushka Sharma film, people will be attracted to come and watch the movie. This will in turn lead to more awareness about the condition and more acceptability in the social circle.”

Sentiments shared by Delhi University student and blogger Vinayana Khurana, who has cerebral palsy. “I loved that my favourite actress, Anushka Sharma is playing the role of a woman with cerebral palsy. I really feel that it is important to have a condition like CP in mainstream cinema to break all the stereotypes that people have around some specific disabilities.”

When it comes to films on disability, Bollywood has been doing a better job of late unlike the films of the past which showed them in a stereotypical manner or mocked them for comic relief. What is also refreshing is that mainstream actors are portraying disabled characters, be it Rani Mukherji, Hrithik Roshan and Ranbir Kapoor.

All very well but as Virali Modi, a disability rights activist points out, it is high time the Hindi film industry truly walked the talk and cast actors with disabilities. Modi, who is a model and an aspiring actress, says she has auditioned for many roles but repeatedly comes up against a wall because she is disabled.

I have given auditions for side and main roles many times and the only barrier that comes up is my disability. Why cannot a person with a disability play these roles? Take Guzaarish where Hrithik Roshan plays a quadriplegic. The character could have been played by a disabled person. There are so many more films like these like Black, or Barfi to name a few. – Virali Modi, Disability rights activist

What this will do is bring a more realistic portrayal of disability on screen, says Sinha, who shares Modi’s sentiments. “I feel that disabled people should be given opportunity to act in the movies because they can express their true feelings. It will also lead to an immense gain in social acceptability of people with multiple disabilities like cerebral palsy.”

Films are a slice of life and are meant to reflect the world around us. To do that, it is time the mainstream film industry went beyond mere tokenism when it comes to portraying people with disabilities.