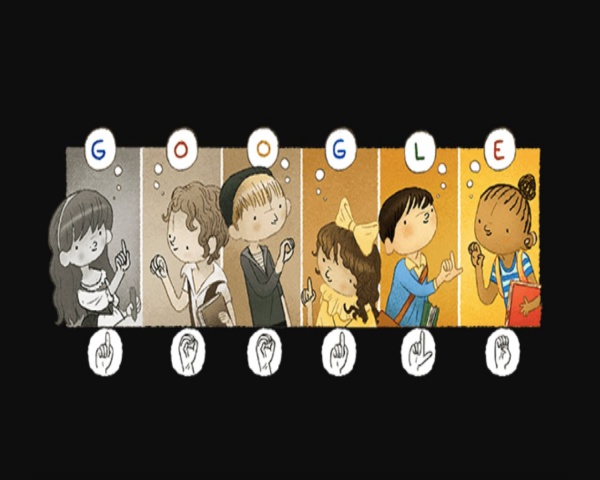 Noticed Google Doodle today? It shows a series of characters communicating in sign language, a Google tribute to a popular French educator from the 18th century by the name of Charles-Michel de l’Ã‰pÃ©e. He was also known as the Father of the Deaf and today is his 306th birth anniversary.

What makes Michel so special is that he helped remove a widespread misconception that people who are deaf and hard of hearing cannot learn. He spent much of his life developing the first sign language for deaf people and he put together a systematic method to teach them.

Called the Instructional Method of Signs, it is still used in Europe in many schools for deaf people. The method uses gestures and hand signs designed with the basic philosophy – “The education of deaf mutes must teach them through the eye of what other people acquire through the ear.”

Michel also started the world’s first free school for people who are deaf and hard of hearing called, Institution Nationale des Sourds-Muets Ã  Paris. He passed on his methods freely to the public and other educators. He also started teacher-training programs for teachers from countries outside France so they could take his methods back to teach deaf people in their own countries.

No wonder his legacy is fondly remembered across the world even today. Take a look at the reactions pouring in to Google Doodle.

“So heartening to see today’s Google doodle that marks Charles MichÃ¨le de l’EpÃ©e ‘s 306th birth anniversary,” commented Tina Saighal, Founder, Sanket Foundation on Facebook. “Though I disagree with his intent of establishing French Sign Language to share religious discourse so that “deaf people wouldn’t go to hell”, its admirable that he established a method for classroom teaching that became a foundation for other sign languages and accessible deaf education worldwide, including American Sign Language ( established by Laurent Clerc, a deaf pupil of the Paris.

Google dedicates an animated doodle to celebrate 306th birth anniversary of “The Father of the Deaf”, Charles-Michel de l’Ã‰pÃ©e !! This is the best thing you can see today on the Internet! Check it out here! – Vindhya Infoemedia

“If it wasn’t for people like him, all deaf people would not have the life they do now. Fantastic to see @google bring inclusion to the doodle!” tweeted SueCodes, a business analyst from Australia.