Deaf-ICC World Cup T20 off to a rocking start, 5 countries to fight it out for top honours 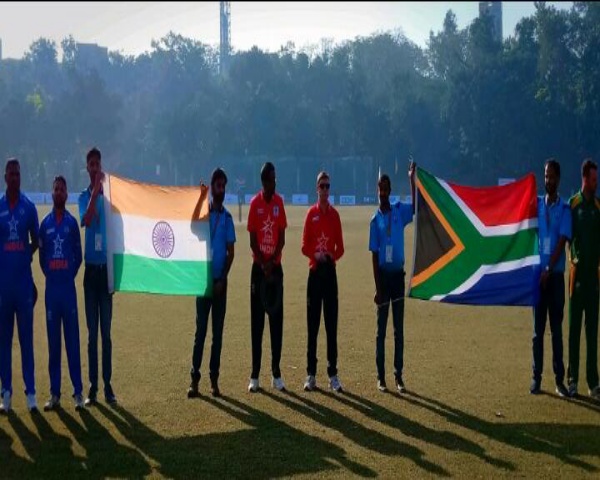 The first Deaf-ICC World Cup T20 is off to an exciting start with the first match played between host team India and visitors South Africa at the TERI Grounds in Gurugram.

The title sponsor for the event is Star Sports and is being hosted by the Deaf Cricket Society and organised by the Deaf
International Cricket Council (Deaf-ICC).

India won the match thanks to an outstanding performance by Manjeet Kumar who scored 57 runs of 38 balls. Kumar did not stop there and followed it up with two wickets in four overs, giving away just 22 runs.

Helping Kumar at the crease was captain Virender Singh with a brilliant knock of 58 runs of 43 balls.

India won the toss and opted to field. The South Africans scored a formidable 166 in the 20
overs, losing 7 wickets. Dudley Russouw was the star player for South Africa scoring 58 of 38 balls
including 4 sixes and 4 fours. The South African team hit the 100 mark in 11.3 overs.

India won the match with 3 balls to spare. Coach Kiran Sane was happy that the game went according to plan,

Our strategy was to win the toss and choose to field so we could take advantage of the moisture on the ground. We got the benefit of that and were able to
take a wicket in the first over itself. But, South Africa played very well. They were successful in putting together a good partnership in the middle. Then our spinners came on and we were able to squeeze them and restrict them to 167. When it was our turn to bat, we tried to get off to a good start, – Kiran Sane, Coach Indian deaf cricket team

Coach Sane had a special word of praise for Kumar, Singh and Baroda player Imran Sheikh as well. “Shaikh came on in the middle and scored a massive 24 runs of 8 balls. The match turned from there and we won.”

In the second match, Sri Lanka took on Australia.

The Australians were clearly overwhelmed by the spin attack of the Lankans, and were all out at 101
in 15.2 overs.

The Man of the match was Manjula, who gave full credit to the Aussies for their performance.

“Australia is very strong team. We started the match with a
target of getting 150 runs. We were very happy when we reached 166. The captain’s 33 helped a lot. We were able to restrict the Australians to 52
runs with 5 wickets down. We have a very strong spin attack with three
spinners that helped a lot.”

The tournament will end on 30 November. To track the matches and get detailed analysis, download the Deaf-ICC T20 World Cup 2018 app