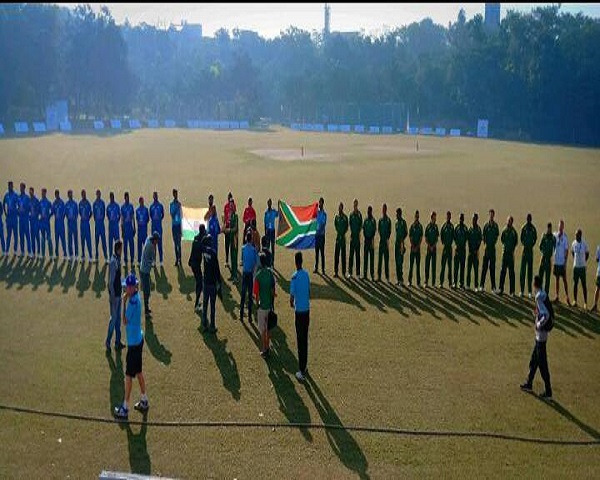 With teams from as many as five countries including India fighting it out for top honors at the Deaf-ICC World Cup T20, the competition is getting quite intense. The tournament, which ends on 30 November 2018 has teams from Australia, Sri Lanka, Nepal and South Africa, apart from India.

India has done well so far having beaten South Africa on the opening day of the series. The host country won the third match as well, beating Nepal comfortably thanks to some excellent batting by Baroda player Imran Shaikh, who came through in the first match as well. Shaikh smashed 55 runs of just 18 balls with 5 sixes and 4
fours and deserved the Player of the Match award. Shaikh was well supported by Akash Singh who scored 11 runs from 11 balls taking India to 68 for no loss and victory.

Nepal won the toss and elected to bat and were bowled out for 67 runs in 19.3 overs. The Indian innings lasted just 4.5 overs within which no wicket was lost. Manjeet Kumar was the other star player for India with 3 wickets in 4 overs, which included two maidens and just five runs. Nadeem Shaikh also came through with some excellent balls, taking 2 wickets in 3 overs, and giving away just 10 runs.

Much praise has come for the way in which the series has been organised.

The ground here is lush green and beautiful. The organisers have done a
great job and the arrangements are absolutely perfect. Of the two or three
teams I have seen practicing and playing, the quality of cricket is
outstanding. Some of the players are just extraordinary. I look forward to
the rest of the tournament and wish all the teams the best of luck and great
success for this tournament. – M P Singh, Cricket Coach, Sports Authority of India

The tag of the most exciting match so far goes to match 4 which was played between Australia and South Africa. South Africa beat Australia in the super over after the two teams tied scores at 158 after playing 20 overs each.

Australia won the toss and chose to bat. They hit 100 after 13.2 overs thanks to some a good strong score of 38 by David Melling in 33
balls. The Australians ended their innings with 158 with the loss of 5
wickets. Melling also took 3 wickets in his four overs giving away only 22
runs, a performance that got him the Player of the match award.

South Africa followed closely hitting 100 in 13.4 overs and ended the batting with 158 for the loss of 8 wickets after 20 overs. The South African batting was mainly driven by Andre Van Rooyen‘s 44 off 32
balls and Rual Kumalo‘s 39 off 33 balls.

On the bowling front too, Rooyen’s 2 wickets in four overs for 18 runs helped fight off the Australian challenge. Jason Mathers, the Australian coach was happy with the results.

“What a fantastic game this was. This game means a lot to a lot of these guys. The
South Africans played a fantastic game and fought really hard. At one stage,
both sides were down and they fought back. Hats off to South Africa. If we
had just held our nerve a little bit longer the game would’ve been ours.
Both teams have a long history playing against each other but this is the
first time, I think that either has faced a super over. I am really proud of
the guys”, said Mathers.

Tuesday’s match gave some cheer to Australia, which beat Nepal in the lowest scoring match so far. Nepal was defeated in just 5.4 overs. Nepal, which chose to bat, was bundled out for just 56 runs, after 17.2
overs. Player of the match Luke Trudgett took two wickets, giving away just
4 runs in his 4 overs and one maiden.

The Australians have so far won two of the three matches played. They will be up next against India, which is likely to be a tough match.