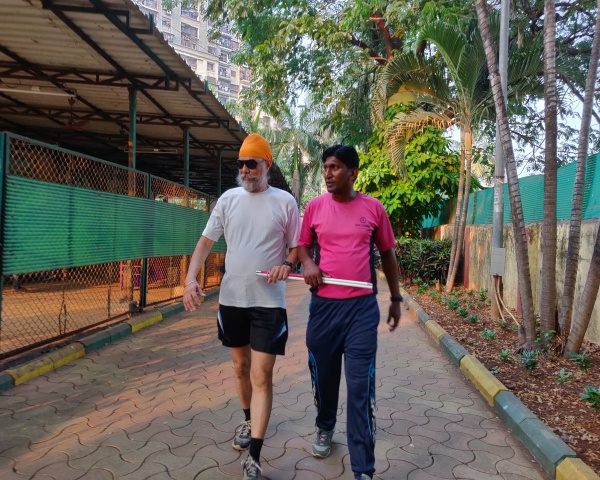 Just back from his 96th marathon, Amarjeet Singh Chawla is already looking forward to the next milestone, his 101st run in Mumbai in January 2019. Why 101 and not 100? Well, because Chawla considers 101 to be a lucky number.

Fondly called Sporty Sikh, 62-year-old Chawla, who is visually impaired, started running marathons in 2005 after he received a message inviting blind runners to take part in the Mumbai Marathon. He decided to give it a try and was hooked for good.

He plans to continue until he completes 150 marathons.

I have been running for 13 years now. I planned to stop after 101 marathons, but I have changed my mind. My family worries that I might fall and injure myself but my response to them is that I have lived a long and good life and if I die now, I have nothing to lose. – Amarjeet Chawla, Visually impaired runner

Chawla started losing his vision as a teenager due to macular degeneration and gradually went completely blind. An active man, the change in circumstance hit him hard and he plunged into depression for a long period. The turnaround came when he discovered running.

The passion for running is one he has nurtured at considerable personal expense. There is little support for blind runners. From paying for an escort to run with you to traveling to different cities where the marathons are held, Chawla spent from his savings. Less than two years ago, he finally found a sponsor.

“My aim is to encourage more blind people to run, but when I urge them to sign up, they ask ‘what will I get from this’, rues Chawla. “When I tell them that I spend from my own pocket they lose interest. if marathon organisers were to step forward and waive the fees of blind runners, that would help encourage more participation from people who are visually impaired.”

His 101st run is generating much excitement. Daughter, Guneet has started a Facebook page on the event and nearly 100 people have signed up, some to run and others to witness the Sporty Sikh making history.

“There is no compulsion that people have to run,” says Guneet Kaur Chawla. “We are promoting the fact that it is my dad’s 100th run and we want people to be a part of the moment. I am so proud of him and I think he is a symbol of the fact that people with a disability should not give up and feel depressed. There is so much one can do so much in life.”

Escorting Chawla in his 101st will be Rahul Brahme, who has been a part of some epic moments, like the time Chawla finished his 50th and 70th marathons. A bus conductor with the BEST Undertaking, Brahme has run 23 marathons with Chawla and has come through for him in some important moments. So, it is only befitting that he be present for the century run.

“I met him when I was running a local marathon and was motivated to help him”, says Brahme. “Often escorts who had promised to run with him would ditch at the last minute so I started keeping my Sundays free to be available to run with him. Thanks to him, my endurance has improved. From 5-km marathons, I now run 21-km”.

For Chawla, the hunger to aim higher just keeps growing. “I was planning to call it quits after running 25 marathons”, he laughs. “But even while running my 25th in Pune, I had made up my mind to run 100 marathons. As I get closer to my target, the hunger just grows”.

This passion has brought with it some glorious moments as well. Like the time he was hugged by the God of Cricket, Sachin Tendulkar at an event. “I was being felicitated and when I went onstage, he hugged me”, says Chawla with a smile in is voice. “That felt so great”.

ALSO READ:
Lack of sight is no barrier for this Mumbai shop owner who is running his 82nd marathon today!