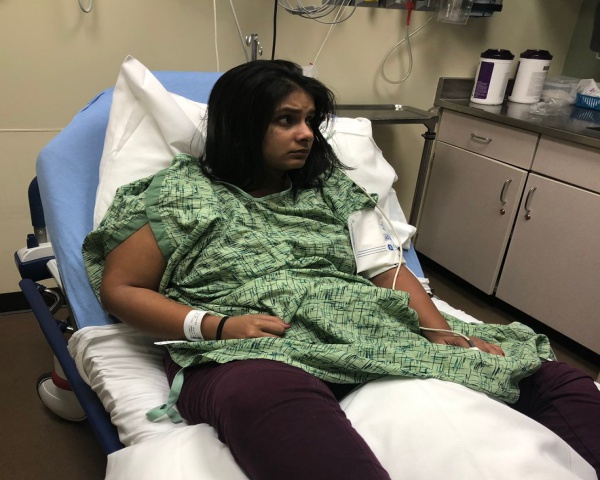 “Really sorry for the suffering you went through”.

That was the response from Minister of State for Civil Aviation, Jayant Sinha a day after prominent disability rights advocate Virali Modi posted a series of tweets about her harrowing experience at the Mumbai international airport.

The tweets, that went viral, detailed Modi’s mistreatment at the hands of airport personnel during security screening while checking in for a flight to London.

Modi, who uses a wheelchair, has said that she was repeatedly asked to get up. This was even after she informed the security official that she was unable to do so. She suffered a cramp after a woman security officer lifted her leg forcefully.

Speaking to Newz Hook from the United States, Modi said she is still in considerable pain.

My knee is still painful. I have been putting a heating pad on it and taking my pain medication. If in three days it doesn’t feel better, I’ll have to get an MRI done. – Virali Modi, Disability Rights Advocate

The Central Industrial Security Force (CISF), which is in charge of airport security, responded to Modi’s tweets saying they were following a mandatory pre-departure security check. They continue to insist that the staff was polite to Modi.

A popular figure on social media, Modi, who is also a beauty pageant winner, model and actor, frequently speaks up about the accessibility issues faced by disabled people in India when it comes to using public transport or restaurants. Paralyzed from the waist down since 2006 after a malaria attack, she travels frequently on work and asks why airports in India do not follow better procedures during security checks.

“Every other international airport has chemical strips to check the wheelchair and shoes, a disabled passenger doesn’t need to get out of their wheelchair”.

Modi’s is not a one-off experience. Despite sensitization campaigns, passengers with disabilities frequently complain of harassment at Indian airports. While sensitization procedures to handle the needs of disabled people have been set down, practice remains flawed.

As disability rights leader Dr Satendra Singh‘s tweet to Sinha points out. “I was scanned by ETD in Mumbai so why they didn’t use it this time?” referring to the Explosive Trace Detection which is used when regular X-ray screening cannot. Dr Singh has also demanded that the CISF use CCTV footage to identify and punish the guilty officials.

Modi’s ordeal continues to draw huge support from social media users who have slammed the CISF for its insensitive response and are detailing the harassment they have faced while using Indian airports.

Viral Patel, a finance expert tweeted, “My mom is quadriplegic… She dreads travelling anywhere far because of couple of not so good experience at airports…. I don’t personally blame the CISF staff… But they should be trained properly and made aware of people with disabilities”.

Another response from Subhash urged the CISF to look at their procedures again. “Dear CISF, we respect your procedure. But if it is causing inconvenience to a person in wheelchair then please CHANGE THE PROCEDURE rather than sticking on to it and justifying even if it is not appropriate”.

On her part, Modi has made a gracious offer to work with the government to enable better accessibility. “An apology isn’t enough”, she told Newz Hook. “There needs to be action taken. I would love to work along side the government and help them provide the necessary sensitivity”.

Voices that need to be heard to ensure due procedure is followed with humanity and sensitivity.