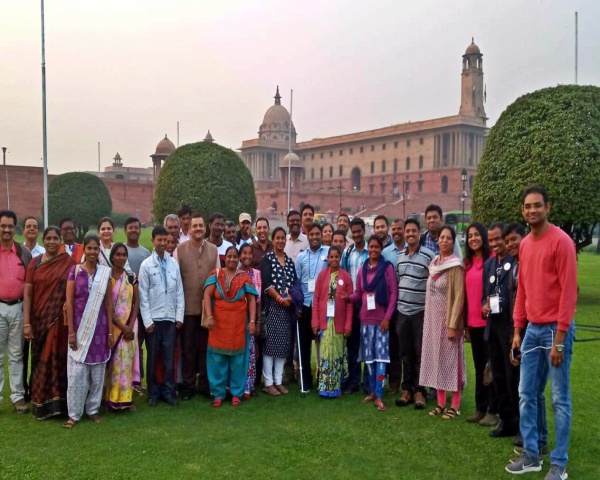 Jayashree Kunju‘s story is typical of what thousands of people with leprosy in India experience.

“When I was diagnosed with leprosy, I fell from a world of innocence into one filled with despair”, recalls Kunju, who is based in Bengaluru. “A world that was seen as gory and dark. While my family was supportive, there was internal stigmatisation. I felt a great fear of being rejected”.

Until one day, when it stopped mattering and Kunju decided to step forward and speak out about her journey. A remarkable step for two reasons. One, few people affected with leprosy want to tell the world about it. Two, because there are even fewer from an urban, educated background like Kunju doing so.

Kunju, who heads a company called IDAF Global was among those who spoke at a two-day meet organized by The Leprosy Mission Trust India (TLMTI) in New Delhi this week. The meet was to honour the champions developed by TLMTI, the oldest and largest NGO working with people affected by leprosy.

Under the TLMTI’s CREATE project, 35 champions from six states across India gathered to talk about their achievements and share their struggles and learnings. They are champions because not only have overcome the challenges of leprosy, they are now advocating the cause of others affected by it.

With most other kinds of disabilities, it is the people themselves who advocate for their cause and highlight their issues. However, people affected by leprosy were not doing so as they did not want to be recognised, they wanted to live in an incognito mode. Now many people have come forward, their capacities were built over the last few years and they have been championing for their own rights and standing against any forms of violations. This forum to celebrate their successes as Champions. – Nikita Sara, Head, Advocacy & Communication, TLMTI

As you hear the stories of the champions, what strikes you is their remarkable journeys. Take Mangala Suresh Dhondge from Amravati district in Maharashtra. Affected by leprosy in class 9, she was forced to quit school and stay home for many years. It was only after she moved to Nashik and joined the TLMTI centre there that life changed.

“I learned stenography and computers”, says Dhondge, who is married to someone with leprosy and has a baby. “Today I work to create public awareness through training programs where I help other affected people understand their rights.”

Dhondge also does accessibility audits to help create an environment that is inclusive of people with disabilities.

All this is truly remarkable given the overwhelming stigma and lack of support that people with leprosy face, be it from the public or government. There are many laws that continue to discriminate against affected people, something that came up at the Delhi meet as well, with the champions and experts drawing up a plan to advocate for repealing those laws.

“We are concerned that the government may not give priority to leprosy”, said Sara. “That it may ignore the Supreme Court’s orders and not act on affirmative action seriously”.

A concern that is well-founded given the government’s poor record in the matter, but given the determination and passion in these Champions, it will not go unchallenged.

“It is incumbent on people like us to come forward”, says Kunju. “If people like me do not come forward, we are doing a disservice. I am the recipient of that years of research thanks to which a cure for leprosy was found. Having benefitted from it, I should speak out”.

It is these new, emerging voices that are bound to prevail over centuries of stigma and apathy.