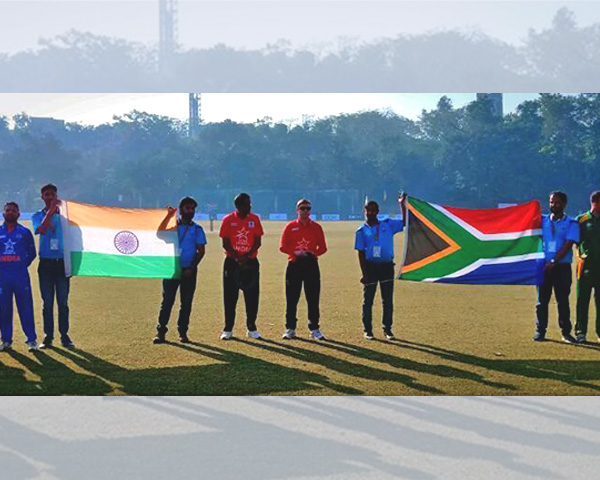 India may have lost in the finals of the Deaf-ICC World Cup T20, but it was a victory for deaf community as the series ended successfully in Gurugram on Friday evening.

There were some heart-breaking defeats witnessed over the five-day tournament, with Lanka finally emerging victors, beating the host team by 36 runs.

The tournament saw the Indian team putting in a strong performance, beating South Africa n the opening match Some competitive matches were played, comparable to the regular first class World Cup. Both India and Lanka ended top of the charts with three wins, but Lanka lifted the series with a higher run rate.

The Player of the Tournament was the captain of the Sri Lanka team Gimadu Malkam, who hit 41 runs off 41 balls, with 2 sixes and 2 fours and. Malkam also took 3 wickets in his 4 overs, giving away just 25 runs. India started off well, winning the toss and elected to field, but were not able to contain the Lankan batsmen, who went on to score 145 in their 20 overs.

India could not face face the Lankan bowling attack and were all out in the 18th over, making just 109 runs.

This World Cup is a testament to how technology can help
execute some great things. Using the Internet we were able to broadcast the
matches across the world and able to get support from all corners. Social
media and the Internet were of immense use and I look forward to taking this
initiative that we have started to much greater lengths in the coming
future. – Roma Balwani, Member, Advisory Board, Deaf Cricket Society

Sumit Jain, General Secretary, Deaf Cricket Society was also happy with the quality of cricket. “The teams showcased talent that has not been seen in the highest category of the game. Even a team like Nepal got
some great International exposure and experience and I am sure they will be
a formidable team in the next tournament. The physically
challenged need this kind of support and we are very happy that people have
come from all parts of the country top watch and support the teams.”

Also present at the final match was Stefan Pichowski, Chairman, Deaf-ICC, who said the language of cricket was an effective way to spread the message of inclusion. “We have
created new heroes and a new segment of one of the world’s most loved
sports. It can only get bigger from here. The Deaf Cricket T20 World Cup
2018 has proven to be a life-altering event for every hearing impaired
person in the world.”

There was much excitement when former Australian cricketer Brett Lee came as chief guest for the closing ceremony. Lee, who is Cochlear’s Global Hearing Ambassador, said, “I am delighted to be watching the specially-abled cricketers playing the deaf ICC T20 Cricket World Cup and I see them as
world class cricketers as talented as any of us.”

Significant words coming from one of the world’s most loved and respected cricketers.