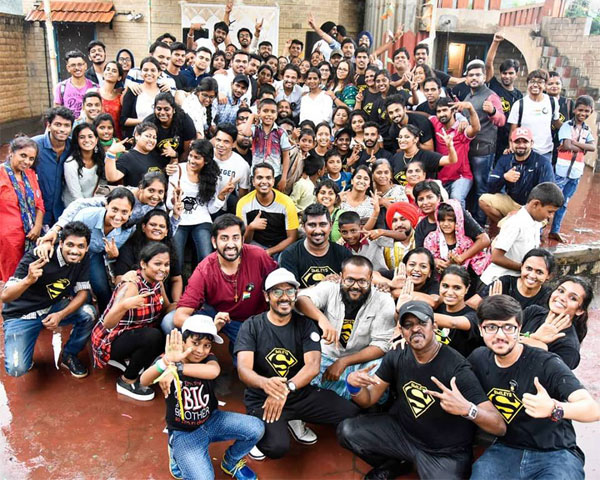 When Vishnu Soman, a youngster from Kerala decided to start an NGO in Bengaluru, his prime motive was inclusion. He wanted to provide a platform for people with all kinds of disabilities to come together and show the world that nothing is impossible. This is how Smileys India came to be launched in 2011.

Back in college, Vishnu and his friends were popularly called jockers for the smiles they brought to the faces of people around them. After pursuing his engineering in Chennai, Vishnu took up a job in Dubai. That is when he started to think seriously about starting an NGO and returned to Bengaluru to start Smileys with his brother Vishal.

In 2011, we started the inclusive dance festival ‘Tandav’ which became a huge success. That is when Smileys took a U-turn, literally. People from the disabled community also started noticing us. We have been collaborating with Enable India as well. So a lot of volunteers from that organization are a part of our venture. Irrespective of their disabilities, people come together. At ‘Tandav’, we have people with and without disabilities dancing to their heart’s fill. In fact, disabled people drive Smileys now!- Vishnu Soman, Co-founder, Smileys India

So far Smileys has been doing artworks and doodles for NGOs, orphanages, schools, and so on.
While they don’t get direct support from the government, the Bengaluru Police and Namma Metro have been their biggest backers. They painted the police control room with beautiful colours and innovative designs, a venture that involved people with and without disabilities. Namma Metro has also been reaching out to them to draw artworks on their walls.

Apart from ‘Tandav’, Smileys have a couple of projects in hand. Paint for a Cause is a venture where volunteers paint walls of buildings to spread the word about certain causes. At Raga Bomb, people with and without disabilities come together to jam to some kickass music. Vishnu and team hopes to revamp this venture by 2019. Their inclusive dance school Attam holds classes every weekend. Volunteers are trained in traditional dance forms at this dance school.

Their next big project is Smiled Education where they will be seen training children in holistic education for the mind, body and soul. Workshops will be held across Bengaluru where students will be asked to write what they would love to do in life. They will write letters to themselves and even find solutions by sitting together and discussing.

“We want to focus on art classes, recycling and volunteering. Basically, it must be a 360 degree development. We plan to expand our venture in Kochi, which is a tourist hotspot. If all goes well, we will be full-fledged by 2019”, says Vishnu.

Srilatha K S, a wheelchair user from Bengaluru, has been a volunteerhere since 2015.

“For me, being a part of this venture has been great in many ways. I could visit many colleges and companies to promote awareness on inclusion. So my weekends are busy and packed, all thanks to Smileys”, smiles Srilatha.