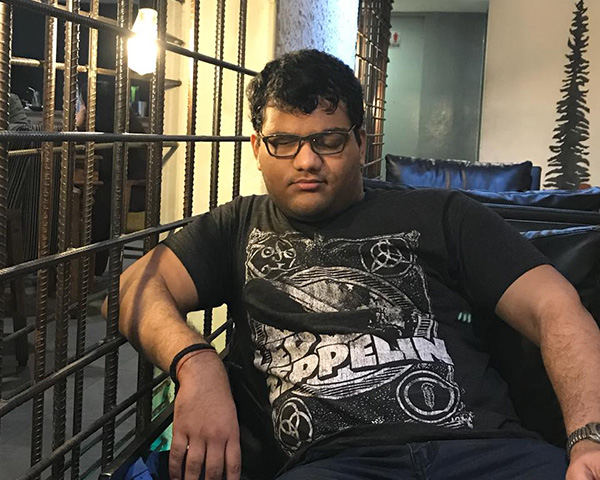 In our guest column this week, Maitreya Shah, who is visually impaired reviews the latest Shah Rukh Khan starrer ‘Zero’. Shah is a disability rights activist and a student of fourth year B.A. L.L.B at the Gujarat National Law University.

Shah Rukh Khan, the Badshah of Bollywood comes out with a new film, and it’s in the news ever since the trailer was released. Whatever my personal emotions might be after watching the movie as a sincere viewer, I am strictly restricting this review to disability perspectives.

Zero’s trailer, unlike other B-films made a lot of us anxious and excited at the same time. Here, ‘us’ is to refer to the millions of persons with disabilities, long excluded from the mainstream B-films. I’ve hardly seen commercial movies with their lead characters having identifiable disabilities. A few films like Qatl did have characters with disability, but the depiction was far from reality.

With films like Taare Zameen Par, Kaabil and Andhadhun, commercial movies have started portraying disabilities as a part of the lead characters’ identity. However, these films still grapple with the stigma and misconceptions surrounding disability, and to join this list is Shah Rukh’s film ‘Zero’. Zero is one of the only films to have a disclaimer of ‘not to offend persons with disabilities’, which is like saying ‘sorry before slapping’. In addition to the inaccessibility of the film, it also has some serious errors in manifestation of disability-identities.

Firstly, if both Bauua and Aafia have identifiable disabilities-dwarfism and cerebral palsy respectively, their lives shown are too fictional to be real. One has all his problems due to his short-height, while Aafia is a great scientist or astrophysicist, not sure which term defines her exceptional capabilities.

With Aafia’s character, it seems as though Stephen Hawking has been reincarnated as a woman. It is important here to understand that Stephen Hawking was an exceptionally intelligent man, but that had nothing to do with his disability. Not every disabled have to be a Stephen Hawking to be worth a normal human life. This is also why leading disability rights activists have been long-rejecting the term ‘differently abled’, because it is okay to be ordinary; okay to be just disabled.

The film shows a perfect match between Bauua and Aafia, which beyond all the romance, was largely due to their disabilities. Dialogues like ‘teri aakhon mein aakhen daal ke bol sakta hun’ magnifies the issue. If abilities and inclusion are the goals, this movie has an antithesis for you: ‘only defect has a match in defect’. Why on earth would a girl marry a Bauua with dwarfism? Fine, he would marry Aafia, because she is on a wheelchair, and both of them have the same height.

Other major concern with the film is that it shows two extremes with the lives of disabled: either you stay a zero, or you become a Stephen Hawking. Why no middle-class in this? There are other portions of the film with objectionable scenes, like Aafia’s test of her physical abilities. It doesn’t really matter if she’s an astrophysicist, unless she can lift a pen from the ground sitting on her wheelchair. So, physical abilities matter more than intellectual merit.

Moreover, although different disabilities have different ramifications, the film tried to put Bauua’s disability on a lower plank. It was not just ‘short-height’, a person with dwarfism has to deal with manifold issues in his life.

However, the film also had a few positive things to be glad about. A dialogue of Aafia ‘voh muj pe taras nahi khata’ (he doesn’t sympathize with me, made me cheer out loud in the cinema hall) The film also shows an apparent sex-scene in disguise, which goes a long way in reiterating ‘persons with disabilities can also have SEX!’ Which was a happy moment for me.

I am glad that disability is now featured in the mainstream B-films with their lead-roles flaunting it, but too much commercialization with a little reality makes me annoyed. Disability has lately been a good commercial tool to hit the box office numbers, but these films need to show the real lives of persons with disabilities.

Remember Koi Mil Gaya? The film makers there played with the character of Jadoo because it was an alien. Persons with disabilities are not aliens though. Your character can be fictional, the name can be made-up, but the disability has to be real. To close, commercialization is good till the time it doesn’t mislead the audience.
This was ZERO for me.