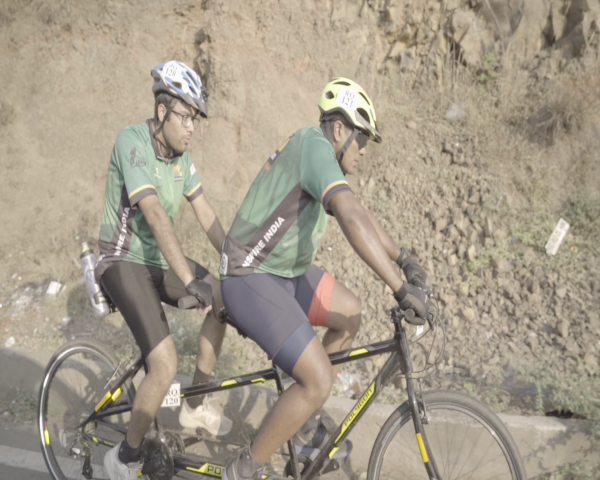 Our guest column this week is by Vineet Saraiwala, Deputy Manager at Future Group, who speaks for inclusion at the workplace and outside. An avid marathoner, he writes about his recent experience in the arduous Deccan Cliffhanger biking expedition.

“True commandos never give up, whether it’s raining heavily or the high altitude is miserable. Whether it’s the strong winds or the steep incline, we shall never give up.”

These words from ex-chief of Army Southern Command, Surendra Nath sir were reverberating in my head close to dusk. I was remembering the previous Ladakh Thrill when we had not even walked briefly to reach the highest motorable road, Khardungla. He was extremely clear that it was a cycling expedition and hence we should cycle instead of walking. For those who are not aware, high altitude cycling is extremely challenging and walking is relatively easier at an altitude of 15,000 feet.

We triumphed on 550-km Manali to Khardungla circuit and were extremely disciplined on the entire journey. We were extremely proud of the effort and integrity to the sport of cycling.

I am inspired by the General and his endurance levels at the age of 62. The Khardungla meeting taught me to seek challenging opportunities and stretch the limits of personal capabilities. Ladakh is an addictive place, where you often return to complete your quota of yearly adventures. I completed the Ladakh Half Marathon the succeeding year under three hours.

The Deccan Cliffhanger (DC) was next on the radar, but I needed a competitive bike and an individual who would like to take the risk of ultra endurance. Tandem bikes are extremely difficult to get as they are available with Indian manufacturers. After a lot of search and persuasion, Giant from Bengaluru got me a descent Polygon nearly three months before the race day.

The joy of riding on a tandem for me is like riding the best Harley or a high end Royal Enfield. You need to be a visually impaired individual to understand the bliss and nirvana of a tandem bike. Roll a joint and feel that high. I would get that high while cruising through the scenic terrains in Maharashtra. You feel like a celebrity while cycling, with the eyes of hawkers, auto drivers, office goers and the entire world on you. Children going to school wave, cheer and shout in amazement. The curiosity and imagination of human beings is piqued and a wave of jubilation fills the air.

The DC is the premier cycling race in India where you need to cover a distance of nearly 650-km from Pune to Goa within 34 hours to qualify for the world’s toughest endurance race, Road Across America(RAAM). This includes breaks for food, traffic snarls, water and sleep. Serious cyclists hardly sleep during race and put in a practise of at least six months. Tandem bike as a timed race and that too in a solo category has never been explored in India. Even the guidelines were unclear until efforts by Divya Tate laid out the foundation for visually impaired people.

Tandem biking comes with a unique set of challenges – the slow ascent speed, synchronising between partners, pedalling inefficiencies and an old technology because of lower demand. The chain on the tandem bike is linked to two pedals and hence the belief that the captains exert more pressure than the stoker is just a myth. The captain and the stoker apply the same effort in tandem and hence the name, Tandem cycle. Though it’s a solo attempt, tandem is a complete team sport.

I was energetic, confident, hydrated and had the conviction I would finish the DC. We were the first on the starting line up and I was attempting the daunting challenge as a pioneer.

Thoughts filled my mind. Like the first meeting with my companion in the race, Assistant Professor Sudev Roy, who is a captain for DC and our practise sessions together. When we were practising in Mumbai, a fellow cyclist told me that had Sudev not responded first, he would perhaps be the one riding with me. Sudey was a full marathoner who had completed numerous marathons. The destiny of a person with visual disability is never controlled by himself independently. Whether it’s sports, studies, or social surroundings. I don’t know if it is right or wrong, but it’s a fact.

You have to give up on a lot of things when you sign up for the biggest endurance event in India. Waking up early, balancing work and play, long saddle time, repairs and my favourite Deepawali sweets. I was used to the sleep deprivations thanks to my study hours at the Indian Institute of Management, Bangalore (IIMB). Sleep deprivation was a habit in the first year and the DC should be manageable without sleep. We practised on uphills, plains, flyovers, and cliffs. We had gone from Mumbai to Pune, scaling 200-km twice.

The Panchgani ghats slowed us and our crew was urging us to speed up. We had slowed down to 20 km/hour and lost time due to food and rest breaks. Tandem has the unique advantage of chatting between partners and you never feel lonely. We talked a lot and stayed quiet on the hard stretches. The rules mandated that we be in sight of the support vehicle at all times. Our crew was pampering us with food and massages. We had followed a wrong turn and lost 10-kms and did not want that to happen again.

I knew that we were slow but was also extremely optimistic. Our families were praying for our good health. Staying on the saddle was becoming worse and we halted for a quick tea. I knew something was wrong but refused to quit. Cycling is a smaller challenge compared to my life’s endurances.

I knew we would not be able to complete the race but was only waiting for the time. It was like the Titanic was sinking and you cannot do anything. Endurance races are beyond control and cramps are quite regular. It was a sheer bad luck. We finally halted near Satara after cycling for 23 hours and a distance of 275 km. If I look back that is an achievement in itself. It was an unforgettable ride with the best team and made us humbler. Statistically, Deccan Cliffhanger has a race qualifying finish of 33% and someday we will be there in the finishing line.

What I take back from the gruelling race is tons of learning and a souvenir of the time chip of the first ever solo tandem attempt in a premier cycling race. I am sad, disappointed, sorry, defeated, but it is like losing one battle when the greater goal is to win the war. If we want to win, we should be prepared to lose and accept failures.

This story of failure is penned to rejoice and celebrate the loss. I will come back stronger and energetic the next time. The thought that will always haunt me is that “Yes,I could have done it”. But what is endurance and a true commando without a comeback story.