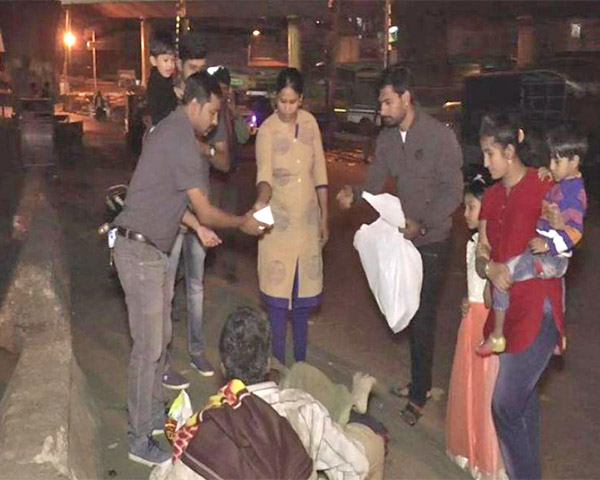 Winters are at its peak in India. In fact, the temperatures have come down to alarming rates in many South Indian states over the past few weeks. Bengaluru, popularly known as the Garden City, always had low temperatures, especially during winters. Thousands of homeless people struggle to deal with the cold weather.

Naik, along with close friend Sagar Muniraju donated blankets and food to over 100 homeless people living under near the K R Market flyover in Bengaluru. Naik started doing this in 2014 and says that thanks to the support from his family, he has been able to reach out to many more.

I know the hardships faced by poor people, especially during winter. During my childhood, my family could not afford blankets. So my father who was a farmer, used to spread hay for us where we slept. All those memories are fresh and vivid. On 31 December, everyone wants to celebrate by partying and having fun. Do we really think of the plight of homeless people who struggle to beat the cold and harsh weather? Most of them sleep under gunny bags and use newspapers as a cover. I knew I had to do something to make a change. –Shekhar Naik, Former Indian blind cricket captain

Naik and Muniraju, along with their families, visited the flyover on the night of 31 December to distribute blankets and a packet of food containing biscuits and snacks. Every year, they spend close to Rs 20,000 on these purchases.

“Some of them sleep on the cold cement floors while others sleep on those dangerous medians in between roads. They are just helpless. Most of us waste food on New Year’s Eve. So I thought why not spare the money and spend it on those who need it?”, says Naik.

“Once, during my college days, I went to purchase some flowers on New Year’s Eve and that’s when I saw hundreds of homeless people spending the night out in the cold. Since then U have been donating blankets to homeless people in the area. Naik came to know about this and he too, wanted to make a difference. That is how we started doing it together. Initially, we used to distribute only to people with disabilities. Now, we pool in more money and distribute to people with and without disabilities”, says Muniraju.

Naik has recently started an NGO named Shekhar Naik Foundation to teach cricket to blind people. He is also active when it comes to taking part on social causes. Clearly, reaching out to people in need is second nature to this final sportsperson.

ALSO READ: Kids with autism recreate the much loved Jungle Book in Bengaluru