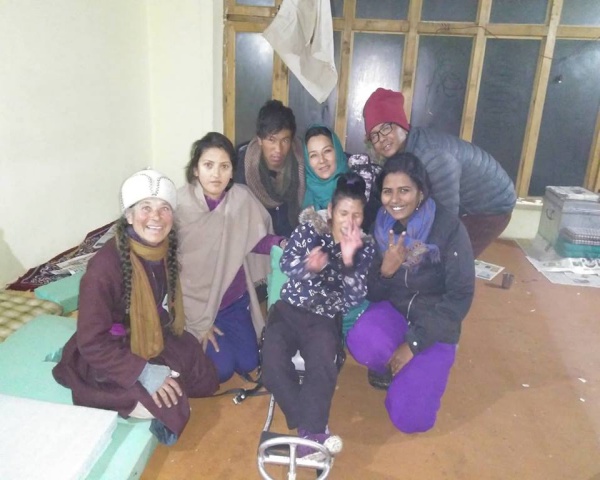 Learning to play ice and sledge hockey on the second highest ice rink in the world. Sounds magical and exciting, doesn’t it? Well, that is exactly what the 40 participants taking part in the second Ability Camp at Ladakh are experiencing.

This is a free, residential life skills residential program for people with disabilities in the Ladakh region between the ages of six to 50 years. The 15-day camp hosted by People’s Action Group for Inclusion and Rights (PAGIR) and the Jammu & Kashmir Police-Leh began on 5 January.

The happy campers include children and youth from remote parts of Leh district. The participants have a range of disabilities like palsy, hearing impairments and intellectual disabilities.

We play ice hockey and sledge hockey which is a Paralympic sport. The sledges have been donated by Canada and the charity at the Canadian High Commission called CanAssist is co -sponsor. We did this for the first time in 2008 but there was a long gap as we could not find a partner after that. Our biggest goal is to raise awareness about the capacity of people with disabilities and to let these kids have some fun. – Cynthia Hunt, Founder-Director, Help Fund

CHAI-India is made up of a group of volunteers from Canada and India who have come together to work in various development projects in the Western Himalayas and in schools in Canada. The response to the 2018 camp was huge and this year even more parents were eager to send their kids.

Among the coaches who has flown down from Canada is Tessa Wilson, who is visiting India for the first time. While the language barriers can be a little overwhelming given the mix of Hindi and Ladakhi, Wilson says she is learning plenty.

“Even in Canada we don’t have camps like these for disabled people and this is something we would certainly like to take back,” she says. “The biggest takeaway for me is how impactful sports can be in terms of changing lives.”

After a morning of some hectic games, the participants get some down time which involves fun activities. “In the afternoon they do enjoyable things like paper making, making knitted animals and simple, traditional skills as well,” says Hunt.

There is also a Design Camp where adaptive aids are made and health camps where mental health issues are discussed, with an added focus on building communication skills and inclusion. “There are experts who come here in the evening to talk to them about health issues,” adds Shruti More, the camp facilitator who works with Handimachal Therapy Centre in Kullu. “There are doctors as well, so the participants get to speak to them about specific health issues in detail.”

The police, which supported the 2018 camp and this one as well, has stepped up in a big way by holding Youth Camps in four remote areas. All this has generated more excitement and fever, and this will hopefully make such camps a more regular feature.