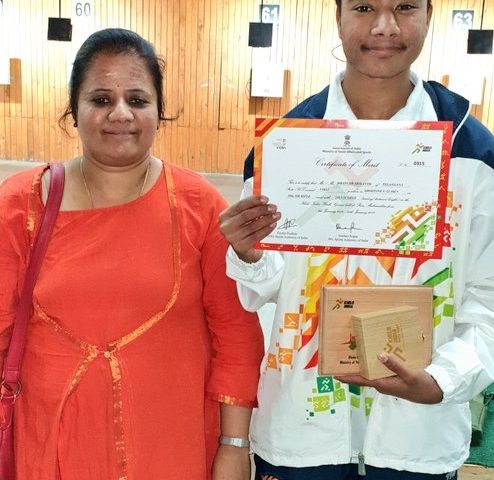 Dhanush Srikanth is clearly the star in the ongoing Khelo India Youth Games 2019 in Pune, Maharashtra. Srikanth has become a sensation after winning the gold medal in rifle shooting.

16-year-old Srikanth, who is deaf, won a gold in under-21 air rifle shooting event. His performance in the final round awed everyone as he shot like a pro.

Srikanth has been trained by Neha Chavan of the ‘Gun for Glory’ shooting academy. He is from Telangana and is also a second degree Dan in taekwondo..The young player has won the hearts of sports lovers and have received praise from all corners.

Champion shooter was among those who praised him on social media.

Whats special about him is that he cannot hear or speak. Shooting sign language had to be specially developed with the coach to make him understand technicalities of shooting. He uses a Cochlear implant to give him a sense of sound. Amazing”, said Narang.

Another awesome performance came from Avinash Yadav in the under-17 air rifle event. Avinash is from Madhya Pradesh and he beat the final score of Divyansh Singh of Rajasthan by 0.2 point.

Avinash’s achievement is a major surprise as Divyansh Singh is all set to make it to the national team for the World Cup in New Delhi next month.

Divyansh had a lead throughout the event but in the finals, he could only reach to a score of 9.7 and was overshot by Avinash who scored a 10.4.