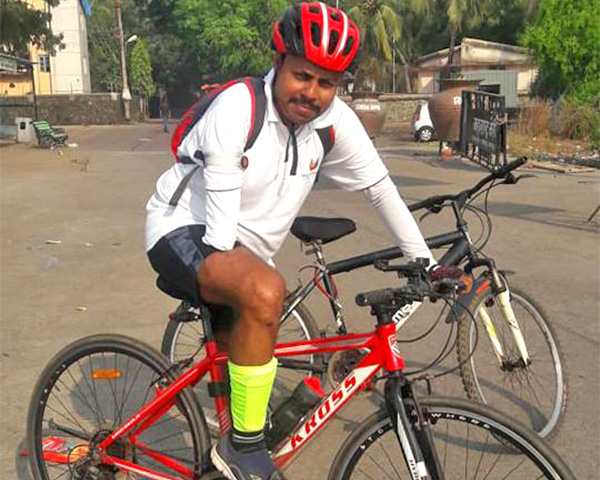 With a cry of Jai Bharat, Jai Hindustan, Mayur Dumasia sets off for the next stop on his cycling expedition.

This 31-year-old, who is a member of India’s national team of physically disabled cricketers, is currently on day 6 of his 15-day inter-state cycling expedition.

Called #MissionsOnTheMove, Dumasia’s journey started at India Gate in New Delhi on 12 January and will end on Republic Day outside the historic Gateway of India in Mumbai.

Through the mission, Dumasia is making stops at several towns and villages to talk about social causes. On Day 5, which was Army Day, he stopped at a school at Chandawal in Rajasthan to celebrate the valour of the Indian soldier.

My focus is mainly on the youth so I am talking about issues like avoiding drugs, sanitation, etc. At Rewari in Haryana, I spoke about women’s safety. I feel it is important to make schoolchildren aware as they are India’s future. It is important that they are not distracted and fall into bad habits. – Mayur Dumasia, Physically disabled cricketer

You can listen to him promote one his causes here –

Man with a purpose

Dumasia, who also teaches at a college in Mumbai, hit upon the idea of doing the expedition sometime in October last year. His aim was to show the world that being disabled is not a barrier of any kind.

Dumasia was 14 years old when he lost his right arm in a train accident, and struggled to cope with his disability, even attempting suicide twice. He is well aware of the stereotypes towards disabled people, and hopes his expedition will help change that.

“I want to show the world that if someone without an arm can do such a tough expedition, we are no less than others. When I am cycling and people notice that I have no right hand, they are shocked but also inspired,” he says.

Through the biting cold and poor tracks, he persists, determined to make the 26 January deadline, whatever the conditions. Accompanying him is Jaishankar Mondal, his student, who taught him how to cycle. Following them in a car with essential supplies and materials to promote his causes is a trusted driver, Harshad Sonwane.

“His commitment and dedication is truly amazing,” says Mondal. ‘Cycling on the steep ghats is not easy, especially given that he learned to cycle just a few months ago after he decided to take this mission up. He has fallen many times and got injured but he just picks himself up and resumes.”

As he cycles, Dumasia is also filling up potholes on the road towards road safety, an issue he is passionate about. The social causes he has taken up have been decided in consultation with the group Ample Missiion, which is supporting this expedition and promoting it on social media.

“Mayur Dumasia was one of the winners of the Bharat Prerna Awards that our organization gives to achievers with disabilities every year,” says Sidhaant Murarka, whose father Dr Aneel Murarka is the founder of Ample Missiion. “When Mayur told us about his plan to do this record-breaking event, we suggested that he stops at different places to raise awareness about social causes. We contacted local organizations and planned the activities for him.”

Dumasia has set himself a target of cycling 100 miles a day. Towards the end of the 1,600-km journey across five states, he will be joined by a team of cyclists from Mumbai, all supporters who want to be there to motivate him on the last leg. Dumasia’s last stop at Gateway will end with a tribute to the Indian soldier.

An achievement that is bound to break not just records, but win this warrior many, many hearts.