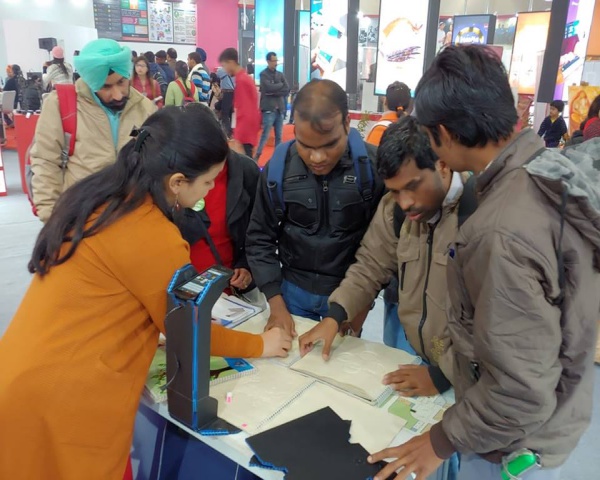 The pursuit of subjects like science, maths and geography is something that visually impaired children in India are not encouraged to think about given the lack of accessible teaching and reading materials. TouchVision, developed by Ankita Gulati, aims to change that.

From poorly trained teachers to lack of accessible reading materials, the exclusion faced children who are visually impaired is evident in multiple ways.

It also denies them the freedom of pursuing subjects of their choice, especially those that rely on the use of diagrams or images, like science, maths and geography.

Something law student Maitreya Shah was acutely aware of right through his years in school.

“I lost my vision completely by the time I was in class 7 and unlike others who are blind from birth, I had the advantage of knowing what some of these diagrams looked like, but that still does not help you solve things like equations, etc. My teachers were not trained to handle visually impaired students and my parents taught me geometry, etc.”

It was experiences like these that led Ankita Gulati, an alumnus of Indian Institute of Technology Delhi (IIT-D) to develop TouchVision, a device that narrates the content in the picture when a visually-impaired person touches it. Gulati says the idea came to her during a visit to a blind school.

While doing a course on assistive technology during my Master’s degree, I happened to visit many blind schools for a project I was working on. During one such visit, I saw a teacher teaching about Indian states using a single handmade tactile map. The map was being circulated among 25 odd students with the teacher giving a verbal description. That was shocking for me and I started probing more. – Ankita Gulati, Founder, TouchVision

After speaking to many blind students and experts, she found that visually impaired students were discouraged by mainstream as well as special schools from studying science and maths beyond class 8 due to lack of content. This was also true for subjects like geography that rely heavily on diagrams. This limits opportunities for educational growth as well as employment prospects, limiting them to certain areas only.

This limits opportunities for educational growth as well as employment prospects, points out disability rights advocate George Abraham, who lost his vision when he was 10 months old.

“I studied maths in college and I struggled to understand the subject. Many people are forced to drop subjects for this reason or they lose marks. Even in a blind school, students are encouraged to take up subjects other than maths and science as it is difficult for teachers to think beyond conventional teaching methods.”

TouchVision aims to change that in an easy to use, affordable manner. Gulati, who is currently focusing on children, says it can be used by anybody. She started off with storybooks, so children would be hooked.

“My first book had a teddy bear character who makes friends with a child so that was way I got them used to soft textures. We want to empower from the preliminary level. The mechanism is such that once you have modified the diagram, anyone can use it.”

The device is made up of a foldable stand that is used to position a smartphone camera for scanning tactile material. A pointer ring on the user’s index finger is used to read the text. Through an app, the smartphone provides simultaneous audio to the user as per index finger’s location. The label and description of the diagrams are narrated as per the finger gestures of the user.

The technology available in the United States and United Kingdom to make pictures accessible is rather expensive, says Gulati. “Even the ones with interactive graphics are expensive and the additional devices cost over US$3,000. It’s expensive for them and we cannot scale it in India. We have developed our own tactile graphics and a portable stand so it can be carried anywhere. All you need is a phone app and you are set to go.”

Among the schools which has used TouchVision is the Saksham School in Noida, which reaches out to children with blindness and multiple disabilities. Pushpa Madwal, who is a teacher here, says it has dramatically changed the way lessons are taught.

“Earlier we would draw figures to make them understand, which was not helpful. Tactile materials helped to some extent but it was hard to distinguish between national and international boundaries in subjects like geography. With TouchVision, we now have options and we use it for reading textbooks, maps and figures.”

Hari Om, a class 4 student here, who is blind, says he loves learning this way. “I like the fact that we can now read the text and understand the pictures too. I also use it to read stories in Hindi and English.”

Reactions that are validation for the years of love and effort Gulati has put into TouchVision. She received the national award for this idea and created five prototypes, testing each one on blind students and using their feedback to improve upon the idea.

“Everyone told me I should be working on something that will make me lots of money, but I persisted because this was important to me and I was enjoying myself so much!”, says Gulati, the smile evident in her voice.