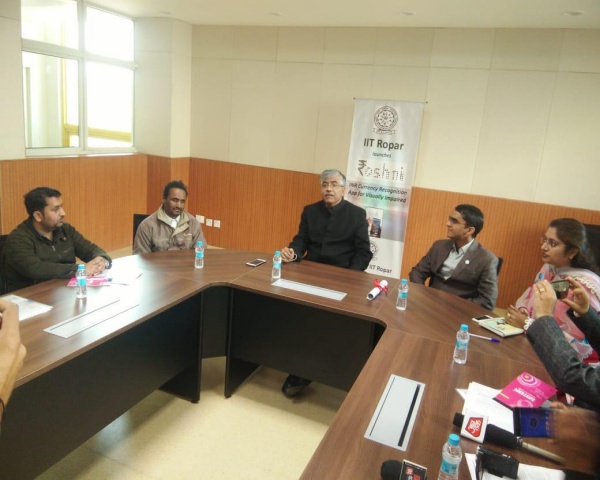 Moved by the difficulties experienced by visually impaired people in identifying the new rupee notes, a team from the Indian Institute of Technology, Ropar (IIT-RPR) in Punjab has developed Roshni, a free Android app that makes it easy to identify the different denominations.

The team of Dr Puneet Goyal and Ph.D students Mandhatya Singh and Joohi Chauhan started working on Roshni about three months ago.

We decided to work on the app after we heard about the issues visually impaired people faced in identifying the notes. Many of them said they were cheated as well. We did a lot of proto testing, used advanced artificial intelligence tools and put together a rich dataset of more than 13,000 images of INR currency notes under varied conditions. – Dr Puneet Goyal, Assistant Professor, IIT Ropar

Roshni is currently on beta testing mode on Google Playstore and has been tested and found effective in a broad range of light conditions and holding angles. All the user has to do is bring the note in front of the phone camera and the app notifies the user about the denomination.

In a statement, IIT-Ropar said, “Roshni is the first Android App that works successfully with new INR currency notes.”

The team is open to the idea of offering the app to the RBI. Roshni has been tested in a well recognised blind school in Chandigarh.

“After demonetization it became very difficult for visually impaired people to identify the denominations, due to the similarity in the sizes of new and old notes,” said S Nirmala, faculty member of the Chandigarh Blind School. “This is especially the case for people who have lost their vision due to old age or some other conditions. For them,Â RoshniÂ will be beneficial.”

S K Das, Director, IIT-RPR has said the team is committed to improving on the app. “IIT-Ropar is very interested in making a societal impact and we are keeping Roshni free of cost. People with disabilities have many talents but the amount of time taken by them in doing basic day to day tasks like identifying currency notes takes up too much of their attention, leaving them with little time to hone their abilities. So, we must develop such assistive technologies that makes daily tasks easier for them.”

Going ahead, the team is looking at support from other blind schools and organizations so they can add advanced features.