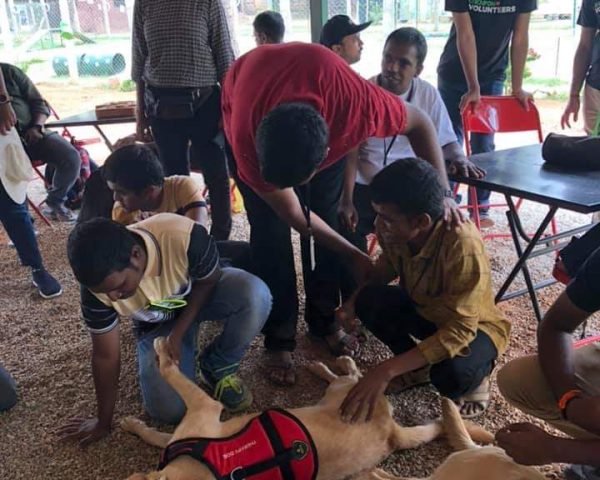 Spending time with animals does wonders for mental and physical health, and Subhadra Cherukuri and Rachel Isaac decided to bring that sense of well-being to more people with their initiative, The Paws and Hooves Project.

The Paws and Hooves Project reaches out to children and adults with developmental disabilities through animal-assisted therapy (AAT). Giving and getting some love and attention from dogs and horses, under the watch of Subhadra and Rachel can lift anyone’s spirits.

The Paws and Hooves Project is a part of Wag-ville,, which is a pet boarding centre with a pet friendly cafÃ© and park. It is open to kids with autism, cerebral palsy, Down’s syndrome and, Attention Deficit Hyperactivity Disorder. Rachel is a physiotherapist, while Subhadra is a certified animal-assisted therapist and dog trainer. They bring their training and experience to this centre.

In the West, animal-assisted therapy is used extensively to help support kids and adults with disabilities, but here in India it is rather low, says Subhadra.

In India, people are generally reluctant and hesitant to expose their children to animals. In fact, we do not even have an organization that certifies one to practice equine-assisted therapy or hippo therapy. An adult who is not used to horses might feel intimidated by the size of a horse, but kids with autism seem to make an immediate connect with these animals. I have been closely working with children with developmental disabilities for the past two years. Parents are slowly becoming aware of the importance of animal assisted therapies. –Subhadra Cherukuri, Co-founder, The Paws and Hooves Project

In India, there are just a couple of animal therapy centres. and experts are slowly becoming aware of the benefits. Many of the kids who visit The Paws and Hooves Project are referred by neurologists, physiotherapists, psychiatrists and some special educators. The activities with therapy horses or dogs are developed in consultation with these experts.

The activities are primarily focussed on the concept of proprioconception, which means the ‘sense of the relative position of one’s own parts of the body and the strength of effort being employed in movement’.

“While there is now increasing awareness in the medical community in India about AAT, even special educators and therapists must be made aware because they are the ones who can also pass on the message to parents. Not every parent is open to the idea of their child interacting with an animal. The change has to slowly happen”, says Subhadra.

Rachel also points out that not every individual is comfortable around animals.

“If we realise that the person is not OK spending time with animals, then we go ahead with the regular physiotherapy sessions. Over the years, I have been seeing many children and adults with developmental disorders. I had always heard about AAT but never knew how to go about doing it. That is when I met Subhadra. We took forward from there. AAT is extremely effective and individuals respond very well to it”, says Rachel, who specializes in physiotherapy for people with disabilities.

The horses and dogs at the Paws and Hooves project are not only selected based on specific criteria, but also specially trained for the purpose of AAT.