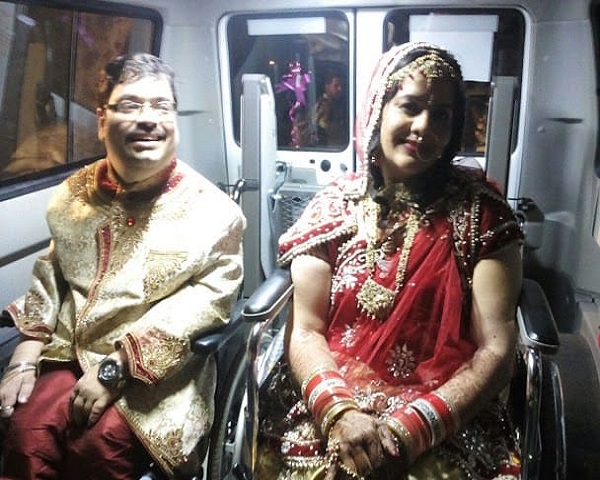 One meeting with Padma , and Manoj Santani, a Mumbai-based chartered accountant, knew he had found his soulmate. A school teacher in Rajasthan, Padma felt the same way. But there was one problem.

No, it was not the geographical distance and nor was it any negative vibes from family members that some disabled people get when marriage talk comes up. Padma was willing to move cities to be with Manoj, and both had the full backing of their families. It was something else altogether.

Manoj and Padma, who are both wheelchair users, wanted to get married the traditional way and there were many rituals and functions that required them to travel together.

The problem was that there were quite a few ceremonies where we were needed to travel together, and we realized that getting a vehicle that could accommodate two wheelchairs was a big problem. We looked around a lot and asked people but found no solution. Finally, I decided to post my requirement in a few groups. – Manoj Santani, Chartered Accountant

Santani’s post was shared widely and eventually caught the attention of Ezy Mov, India’s first wheelchair tax service. Since 2015, Ezy Mov has been dedicated to providing a range of accessible vehicles to people with disabilities and the elderly. They recently launched their services in Goa.

Ezy Mov read about Santani’s need and offered to one of their accessible wheelchair taxis. “When we designed our accessible taxis, the aim was to allow multiple wheelchair users to get in. We decided that every wheelchair cab of ours should be designed such that it can take two wheelchairs, even more if needed, at a time”, says Bennet D’Cunha, Co-founder, Ezy Mov,.

In Santani’s case the taxi came in handy as it could accommodate both his and Padma’s wheelchairs. “They were able to come together and go together”, adds D’Cunha. “This was very useful as they had many functions on the same day, and they used the full-day model”.

The vehicles are in major demand through the year as they can accommodate up to five wheelchairs. They are especially hard to get in the wedding season and need to be booked in advance.

“We also have a lot of wheelchair users who travel to work together use it”, says D’Cunha. The rate for the entire day is Rs 3,500 at the moment. “There are some mobility-restricted users as well as couples. It is a great enabler for couples who want to go together”.

Santani, who has now modified his vehicle to move around Mumbai with Padma has good things to say about the experience. “I liked the service very much and would give it top rating!”

So, if you have a special day coming up and want to spend it traveling around the city with your special someone, go ahead and make your plans without a care!