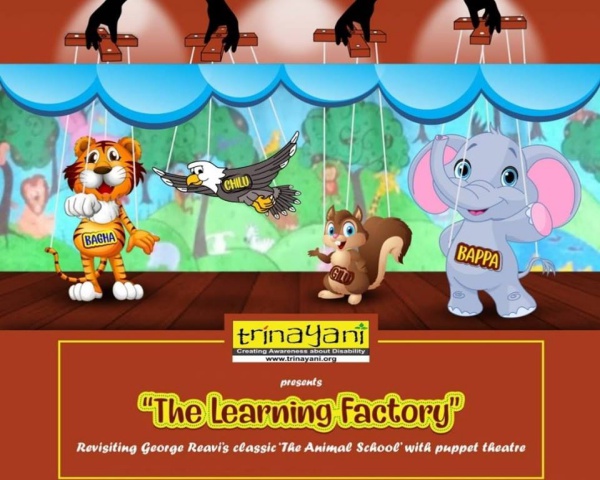 As lessons in diversity and inclusion go, George Reavis‘ classic The Animal School is renowned the world over. Written in 1940, it’s a story about a group of animals who, while organizing a school to help their children cope with real world problems, realize the wisdom of playing to people’s strengths.

A story that resonates at many levels for Ritika Sahni, special educator and founder of NGO Trinayani, who is committed towards creating awareness about disability and diversity issues. A cause especially close to her is making mainstream education inclusive, an issue she has raised on various platforms.

In Reavis’ story, Sahni found a compelling and creative way to take this conversation forward, into schools. And that’s how the idea of The Learning Factory, a puppetry version of this classic was born.

At Trinayani, we have been wanting to a puppet show for the last few years and the challenge was to find the right play that is conducive to the art form. While doing a campaign for an annual function of the Delhi Public School, I had to source out interesting stories to celebrate the theme of diversity and The Animal School was one of them – Ritika Sahni, Founder, NGO Trinayani

Sahni reached out to Charu Prasad, who has vast experience doing puppet shows in Mumbai. “We have been doing puppet shows and workshops for various schools in Mumbai and we teach mathematics through puppetry and storytelling methods. Ritika saw one of our puppet shows a few years ago at the National Centre for Performing Arts (NCPA) and approached us”.

Work on the project began in February 2018, the first challenge being the script, which has been done by Deepak Morris. Prasad and Sudipta Mukherjee Mandal handcrafted the puppets and trained the puppeteers. Why puppetry, we ask Sahni. “At Trinayani, we are constantly experimenting with using different kinds of creative media”, says Sahni,” and puppetry is as effective medium. It is a non-threatening art form and also a dying one. So, we decided to use this medium to talk about an important issue”.

Careful thought has gone into designing the puppets, which Sahni describes as marionettes on a string, with the puppets created such to signify their hierarchy in the forest.

Among the team members handling the puppets is Yojana Wavikar, a parent who is part of Sahni’s meet up group. Wavikar, who has some previous experience working with hand puppets, was more than happy to sign up when she heard about the project.

“Puppetry always attracted me as a strong medium to convey messages for a social cause through entertainment, so I happily agreed to be a part”, says Wavikar. “This show is professionally done with a wonderful recorded soundtrack compete with animal grunts and background music. Even the puppet theatre is beautifully made with two different backdrops”.

Shaifa Mubin Shaikh, a second- year student of psychology is also part of the team that handles the puppets. “I thought moving the puppets would be easy but there is a lot of hard work involved. We are still perfecting our work and there is a lot of scope for improvement”.

Seven songs have been used in the 35-minute show, of which four have been sung by Sahni.

The Learning Factory will make its debut at the Kalaghoda Festival in Mumbai on 5 February, followed by the Godrej Dance Theatre at NCPA on 15 February. That is not the end of the journey as far as Sahni is concerned.

Prasad hopes that the play will act as an alarm system for schools. “We cannot treat everyone equally and everyone has to excel at their own paths”.

A larger message that needs to be put out there repeatedly for adults, especially decision-makers in the education space.