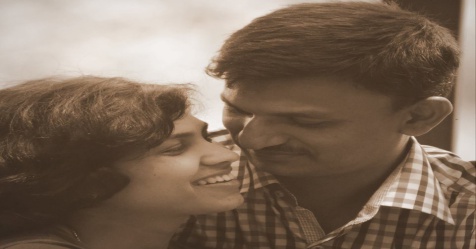 In our series #LovePossible, we bring you the very cinematic love story of the power couple behind the NGO Swarga Foundation, Swarnalatha J and Guruprasad T S.

Swarnalatha J broke every rule in the dating game when it came to Guruprasad T.S. They lived in the same neighbourhood in Bengaluru and met during shared rides in the company cab.

“We had met two-three times and I liked him. The fourth time that we were going to meet was just a few days before Valentine’s Day”, remembers Swarnalatha. When they met at the pick-up point, she asked Guruprasad if his parents were looking for a suitable alliance for him. “He said ‘no’ and I asked him what kind of girl he would like to marry. He said someone who was educated and good-looking at which point I asked him, ‘Don’t you think I have these qualities?'”, she says with a laugh. “I told him that if you haven’t found anyone yet, think of me”.

It is this refreshingly bold, open and courageous nature that sets Swarnalatha apart, qualities that enable this remarkable woman to smile in the face of the debilitating effects of multiple sclerosis (MS).

In 2009, a few years after their son Gagan was born, Swarnalatha was diagnosed with MS. This is a disease where the ability of the nervous system to communicate is affected, leading to many symptoms – physical and mental.

Swarnalatha had defied her family to marry Guruprasad and in this darkest moment, she found herself alone, except for her husband.

I was paralysed neck down and had no one else for moral support. My sisters could not be with me openly as my mother had broken all ties. – Swarnalatha J

The couple went on to have a second child, a brave decision given her condition, something that was made possible thanks to Guruprasad’s steady support..

“He has been there to take care of the kids and his parents and has been a wonderful husband. I always loved him but that feeling has become even stronger over the years. He is my greatest supporter, motivator and inspiration”, says Swarnalatha.

Given the nature of MS, Swarnalatha is often hospitalised for months but she says that her husband and children have never made her feel like she is disabled. “I am open about what I can and cannot do. I cannot be like other wives but we have raised the kids to be very different. I feel that they have become more compassionate towards others.”

To their friends Swarnalatha and Guruprasad are a model couple given the grace with which they go through the hard times.

“She is my greatest source of encouragement”, says Guruprasad. He admits that the debilitating effects of MS were initially a shock.

“We were both depressed for a while but finally we thought this would not help us. We had to support each other and grow. That was the point when I had to push her to come out of her depression and tell her that if you are not able to walk, you can use a walking stick, and I will get you a fashionable one that will suit your style”.

Guruprasad says he often gets pitying looks and comments but he ignores that. “In our house it’s all about fun and we crack jokes. I tell them it’s nothing to feel bad about. It’s a lifestyle thing. Just like people go to a health farm, she needs to go to the hospital every six months.”

Today the couple, who are founder and trustees of NGO Swarga Foundation in Coimbatore, are enabling and empowering countless others with disabilities.


How Nishi & Shishir’s bond grew stronger after a major setback,