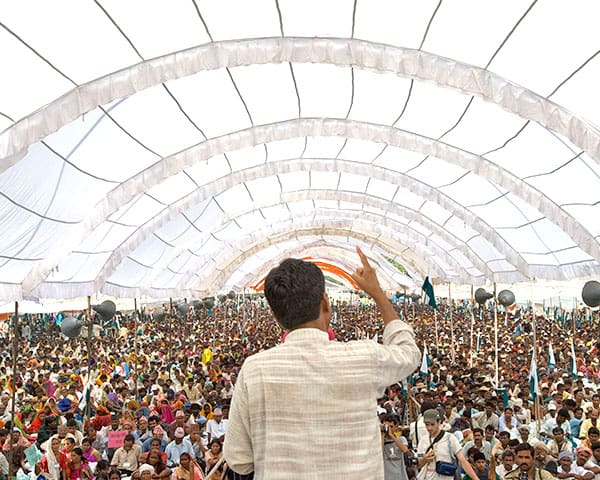 Abusive statements about people with disabilities is punishable under Indian law, then why is it that some political leaders get away with making them repeatedly? That is the focus on Story of the Week.

“Is he talking about himself? Now he is both chowkidar and chor? Is it schizophrenia?” – Rahul Gandhi, President, Indian National Congress party

“Rahul Gandhi calls himself intelligent and perfect. But Rahul Gandhi is suffering from schizophrenia. He deserves to be lodged in a mental asylum.” – Union Minister Ashwini Choubey

“She (Priyanka Gandhi) has an illness which is not favourable and appropriate in public life. You call that illness bipolarity, which means one can see her violent character… She beats up people… The public should know when she’ll lose her balance.” – Subramaniam Swamy, BJP leader

Lulay langdon ko samvida par rakh liya hai, yeh kya kaam karega” (You have kept those suffering from disability of the limbs on contract, what work will he do). – Satyadev Pachauri, Uttar Pradesh Minister

“Premature babies – the ones who are born in 6 months instead of 10 months – their hands and legs get pulled, and their mouth keeps dripping saliva. – Radha Ravi, DMK leader, while comparing political rivals to people with disabilities.

When it comes to people with disabilities, it’s open season for Indian politicians, with leaders across all political parties routinely make statements that are insulting and abusive towards the community.

And the outrage is rare, barring a few instances. The most recent, which got reported widely was when Union Minister Babul Supriyo threatened to break the leg of an audience member while addressing a gathering of disabled people in Bengal. Supriyo lost his cool when a disabled man’s movements distracted him and shouted out, “What happened to you? Any problem? I can break one of your legs and give you a crutch?” He then told his security personnel to break the man’s leg and hand him a crutch if he moved again.

Repeated patterns of behaviour that, disability rights activists point out, expose the real intent behind the promises that politicians make when it comes to people with disabilities.

Just a few days back Rahul Gandhi met some students for dinner and when someone asked a question about accessibility, he promised to release manifestos in Braille. On the one hand you say this and on the other you degrade people with certain disabilities. Even in 2013, Narendra Modi in three separate rallies, Varanasi, Jamshedpur and Chennai, mocked the Congress party using words like blind, lame and deaf. This shows you what they really think and believe, as opposed to the promises they make. – Muralidharan Vishwanath, National Platform for the Rights of the Disabled

Such statements are punishable under specific sections of the Indian Penal Code and the RPWD Act 2016, points out Jamshed Mistry, a senior independent counsel, who works actively for social causes.

“Section 92 of the RPWD Act states that whoever intentionally insults or intimidates with intent to humiliate a person with disability in any place within public view is punishable with imprisonment for a term which shall not be less than six months, but which may extend to five years and with fine”, says Advocate Mistry. “The Act also puts the onus on the state government to set up a special court to try offences against the community. It also puts places responsibility on the Centre and States to take cognizance of such abuse and provide legal remedies, create awareness and make such information available to the public”.

However, there appears to a reluctance on the part of disability rights leaders and organizations to take legal recourse.

Take the case of the TV debate over whether people with physical disabilities should be exempted from standing during the national anthem. A well-known disability rights leader was insulted by a retired Army official on live television and there much outrage but the matter was never taken up by the disability rights community despite a Supreme Court order in their favour.

“It is a human rights issue, but no one is willing to raise it”, acknowledges Vishwanath.

The end result is a larger narrative that propagates the stigma around people with disabilities, a battle that is the toughest to fight. “This makes it difficult to break out of that stigma”, says disability rights crusader Dr Satendra Singh, who filed a case against Uttar Pradesh Minister Satyadev Pachauri under the RPWD Act after he was caught on camera mocking a disabled government worker. The case was later closed by the police.

“When such responsible people speak like this, it is very sad”, adds Dr Singh. The only way to change the mindset, he believes is for the disabled community to become more visible and involved.

“All statements that suggest disability is an insult should be denounced”, adds Supreme Court lawyer Jai Dehadrai. “It is deeply unfortunate that politicians who should be leading the way in showing that disability is nothing to be ashamed, should be making such statements”.

What would be a big step towards empowering the community to speak out against such incidents is to simply follow the RPWD Act in letter and spirit. One of the most important provisions of the Act relating to the setting up of special courts to try offences against disabled people in every district would be a deterrent.