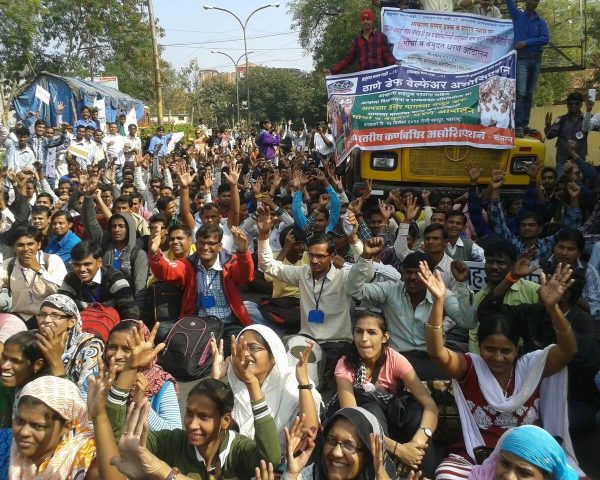 At 15 lakh, the deaf community in Maharashtra are a sizeable number, with prominent organizations like State Level Association of the Deaf (SLAD) representing their interests.

For many years now, SLAD and other smaller groups have been asking the government to take steps to address their welfare be it in education or employment, but despite many petitions no concrete step has been taken.

Now, to draw attention, thousands of deaf people are coming together on 25 February in Pune to protest outside the office of the Disability Commissioner.

We have been putting up our demands before the government for years. The government machinery has not implemented any schemes for the welfare of people of the deaf community. As a result we have decided to protest and show our unity and strength. If our demands are not met, we will take out a massive rally from Pune to Mumbai. – Manoj Patwari, President, State Level Association of the Deaf (SLAD)

Patwari says that the basic demand is to implement an inclusive education system that meets the needs of deaf students. Children who are 100% deaf are not getting quality education under the existing facilities due to lack of sign language.

If their demands are not approved, the groups plans to hold a protest march with 6,000 people marching from Pune to Mumbai to hold a dharna outside Mantralaya, which is where Maharashtra Chief Minister Devendra Fadnavis sits. The protestors will be made up of representatives of the SLAD across the state.

“I call upon all the deaf people of Maharashtra to come together and support the cause. Together we can help improve the future of our children. We have been pushed to our limits. There is no other option left and now we have to ensure that the government realizes our plight”, said Rajesh Kulkarni, Executive Board Member SLAD.

The apathy is depriving the next generation of opportunities says the SLAD. “Our children are not getting education and this hampers their employment prospects”.

Among its many demands is that deaf people be exempted from giving written tests for jobs as they are unable to prepare well for lack of an education.