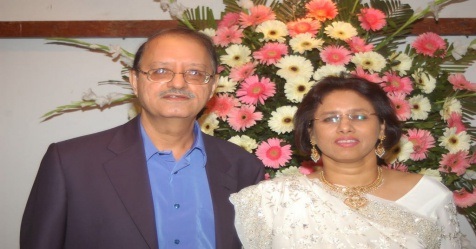 They spent their growing up years in the same Mumbai neighbourhood but Nafisa and Parvez Buhariwala finally met each other for the first time 14 years ago.

“He had seen me walking down the lane outside his home many times, but we finally met when a common friend introduced us”, says Nafisa. Parvez was at a low point having lost his wife of many years to leukemia and in the feisty and independent Nafisa, he found someone who lifted his spirits. His daughters encouraged him to pursue her.

Nafisa, who has low vision, held a senior position at the Central Bank of India at the time and was happy being single at 49. She had worked all her life, managed her home single-handed and had an active social life. The idea of marriage was not top priority, but Parvez changed her mind.

I was always open to marriage but somehow it never happened. When we met a few times and exchanged views, it felt right. I started feeling that he was the right person. – Nafisa Buhariwala

She was frank and forthright about her disability and told him about the challenges that come with it so he was prepared. For Parvez, none of this was an issue. Nor was the fact that they came from different religious backgrounds. He told his daughters and relatives he was committed and certain and that confidence won Nafisa over.

“I saw this as a second chance to be happy and make someone else happy”, says Parvez. “I did not even think about the fact that she had low vision. She had always impressed me with her independence, the fact that she looked after her home, and had a busy professional life. I made my own decision and did not even ask my daughters’ for permission”.

Both say they cherish the companionship and support, this union has brought into their lives.

“I have someone to share things with now”, says Nafisa. “I had reconciled to the fact that I was going to lead my life alone. The loneliness did bother me and there was a vacuum. It is wonderful to be able to share your thoughts and to have someone to care of. These last 14 years have been wonderful.”


When Swarnalatha proposed to Guruprasad


How Nishi & Shishir’s bond grew stronger after a major setback