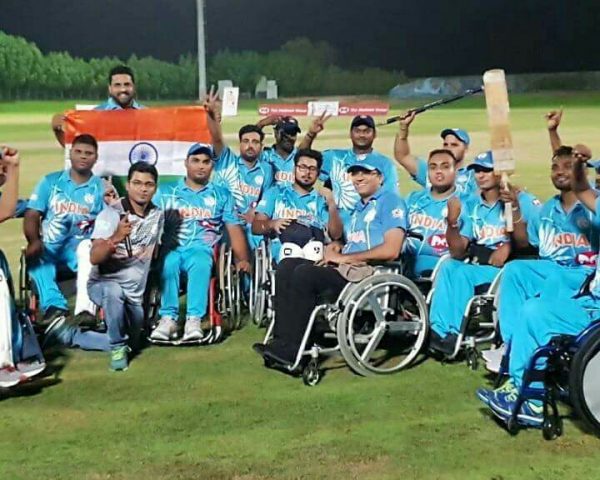 Most of the times, we neglect our exceptionally brilliant and talented sportsmen who are on wheelchairs. Such national matches are an ideal platform for them to come out and showcase their skills. Wheelchair cricket tournaments are held every year during this time.

Most of the wheelchair cricketers have been playing the game for many years. But there was no real platform where they could come out and show the world what they can achieve. Such national matches are great because they give them the opportunity. Such matches must happen regularly. I strongly recommend that these matches must be promoted-Shivaprasad S, Vice-captain of Indian wheelchair cricket team

12 teams including Karnataka, Tamil Nadu, Chhattisgarh, Maharashtra, Delhi, Uttar Pradesh, Madhya Pradesh, Gujarat, Punjab and Haryana are going to be part of the matches. Four group matches will be held initially at different locations across India after which the finals will be held at Delhi. Teams are undergoing rigorous practice sessions and prepping up for the games which are organized by the Wheelchair Cricket of India, a para sports organization.

Surender Kasare who is the Captain of the Maharashtra Wheelchair Cricket Team does not hide his excitement when he talks about the upcoming matches. Kasare has been on a wheelchair since the past eight years after he met with an accident which left him with a permanent spinal cord injury.

“Most of the people think that being on a wheelchair is the end of the tunnel. It definitely is not. We have so much to achieve. In fact, most of the people do not even want wheelchair users to come out of their homes and show their talents. Honestly, it is not easy to be a wheelchair cricketer. It takes a lot of hard work and determination to get there. I hope more people come forward and support wheelchair cricketers so that we can also do our best for the upcoming matches”, says Kasare.

Somjit Singh is the Captain of the Indian Wheelchair cricket team and the Uttar Pradesh team as well.

“I believe that watching us wheelchair players play will motivate other people with and without disabilities. We hope that this would encourage more people to come out of the barriers of their homes. Also, by playing a sport you are more connected to social life which is great than staying indoors. Our team hopes that Indian wheelchair crickets gets more professional in months to come”, says Singh.

Last year, Uttar Pradesh was the winners of the national matches. We need to wait and see who is going to take home the cup this year.