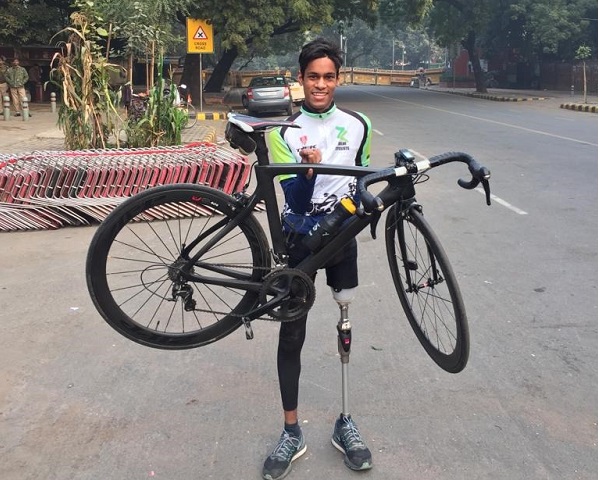 There is no dearth of talent when it comes to para sports in India. However, support is still hard to come by as the experiences of Himanshu Kumar, the champion cyclist from Delhi shows.

Kumar has been appealing for support from the government and private sectors so he can fulfil his dream of making India proud.

Kumar lost his left leg at the age of 15 in an accident but so passionate was he about cycling that he continued with a prosthetic blade.

In 2014, Kumar made history by completing a 21-day running marathon. Called The GRITATHLON, he ran a distance of 225-km on a blade from Agra to Delhi. And to think he was just 21 years old.

Two years later, Kumar did it again, this time completing a 1500-km, 15-day ride from Mumbai to New Delhi that required him to cycle 100-km day.

Kumar’s undying spirit and love for cycling is apparent from the many challenges he has completed. But the setback is the apathy displayed by the government, which despite many pleas has not supported him.

I get disappointed at times but I do not want to give up on my dream. I want to make India proud by setting a world record in para cycling. If I get some financial help, I am confident of achieving the feat. My struggle is not only for myself but also for other disabled people who have the talent but are not able to showcase it due to lack of support from the government and society. – Himanshu Kumar, Para Cyclist

Kumar wants to break the world record in para cycling, a feat that needs funding and other support, says Renu Malhotra Ingale, who has watched him persist despite many odds.

“I have known Himanshu for years and have seen him struggle for funding and running from pillar to post. It is really heart-breaking to see such talent being ignored by the authorities”.

Kumar has reached out to authorities like former sports minister Vijay Goel as well as the current Union Sports Minister Rajyavardhan Singh Rathore.

So far none of them have responded but Kumar is hopeful and determined to keep trying.