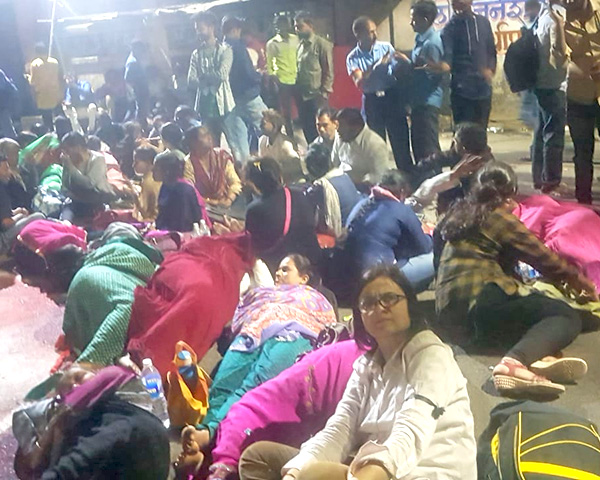 Peaceful deaf protesters in Pune faced lathi charge from Maharashtra police while they were demanding for their rights in the city on 25 February.

More than 11000 people of the deaf community took out a peaceful rally in Pune on Monday, to bring the attention of the government towards their plight. However, several protesters with disabilities were injured when brutal police force was used against them.

More than 400 protesters were arrested by the police and were released after hours. The protesters claimed that they had no intention of disturbing the law and order and they only wanted someone from the government to listen to their demands.

“The police did not pay any heed to our rights. Both men and women were taken to police headquarters and the women were beaten up. We are only demanding what is our right under the RPWD.” Said Aniket Salgaonkar, activist.

Use of violence against the deaf protesters has been strongly condemned by the disabled community, activists and organizations working in the disability sector.

Murali Dharan Vishwanath, The General Secretary of National Platform for the Rights of the Disabled -NPRD issued a statement.

The NPRD expresses its wholehearted solidarity and unflinching support to the agitators. It calls upon the Devendra Fadnavis government to immediately engage in talks with the protesters, concede their legitimate demands and implement them within a time bound framework. Murali Dharan Vishwanath, General Secretary NPRD

Deaf people in Maharashtra have been raising their demands with the state government for years without any redressal.

The situation is unfortunate that the RPWD Act 2016 is yet to be effectively implemented and benefit around 15 lakh deaf people of Maharashtra.
People from the deaf community in Maharashtra feel left out as the government has not been able to pan out a welfare plan for them.

Despite several meetings, requests and pleas made by representatives of the deaf community, the only response received has been reassurances and nothing practical has been done so far.

Women, small children, and students spent two days in the open waiting for someone from the government to come forward.

Finally, the Minister of State for Social Justice and Special Assistance Dilip Kamble met the deaf leaders and after hours of discussions, most of the demands were approved with consultation with Chief Minister Devendra Fadnavis over the phone.

“We have been told that demands are now approved. We will meet the Chief Minister soon and take the discussion forward. We are going through this time of struggle to ensure a brighter future for our children”, said Pradeep More, General Secretary, SLAD-State Level Association of the Deaf

Deaf children continue to miss out on quality education as sign language is not a part of the education system. The lack of effective education for deaf people affects their abilities to get good employment opportunities and the vicious circle of injustice continues.