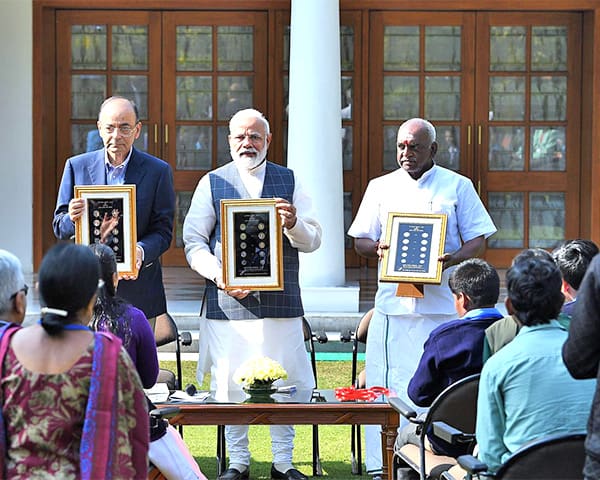 The issue of accessible currency has been a sticking point with people from the visually impaired community in India for a long time now. Now, Prime Minister Narendra Modi has released a series of coins that are accessible for people with vision impairments.

The new coins come in different values – Rs 1, Rs 2, Rs 5, Rs 10, and Rs 20. They come with features that will enable people who are blind or with low vision to identify them. The coins were launched by the Prime Minister and Finance Minister Arun Jaitley in the presence of children with visual impairments.

As per reports, the first ever Rs 20 coin will be shaped like a 12-edged polygon and will have the design of grains representing agriculture. The other coins will be circular with denominations printed in Hindi script.

All the new coins will have the image of Lion Capital of Ashoka Pillar sculpture on them with Satyameva Jayate inscribed below. The words Bharat and India will be written near the boundary of the coins.

People from the community have welcomed the move and hope this will resolve some of the issues faced by blind people in using the new currency.

Blind Graduates Forum of India have been advocating for Accessible Indian Currency for long. It is a good move that the new coins are being launched. I am very keen to check the coins and review its accessibility features. Variation in shapes was a critical requirement that was shared. However the press release of the government does not talk about different shapes for 1, 2, 5 and 10 rupee coins. There is so much more that the government and RBI needs to do for Bank notes and digital currency which is highly inaccessible, Vishal Kumar Jain, President, Blind Graduates Forum of India.

The new coin series will soon be released for circulation although the actual date is yet to be announced. “The launch of new coins is a welcome step but I still have concerns”, added Ajay Minocha of the BGFI. “Since the old coins are still in circulation they will continue to confuse the blind community. It would be better if the old coins are phased out of use and awareness is created about the use of new coins”.

India’s blind community has been facing severe challenges when it comes to using the new currency notes as they do not have any distinguishing features. Several petitions have been filed for currency and digital currency to be made accessible for the people with visual impairments and the matter is pending before the Court.