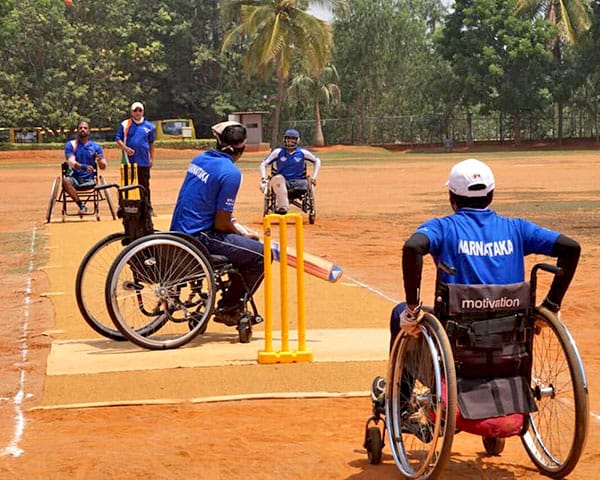 Karnataka outplayed rivals Tamil Nadu and Maharashtra to emerge as champions in the Pool B leg of the T20 National Wheelchair Cricket Championship held in Mumbai. Karnataka has secured a spot in the semi-final and final matches which will be held in New Delhi on 15 March.

Led by Shiv Prasad, Karnataka comfortably beat both the teams by a wide margin, a feat that the captain attributed to a number of factors.

Karnataka is up against some tough sides in the semi-final and final matches. The other states to qualify are Punjab, Chhattisgarh and Gujarat. Prasad says he is confident after the Mumbai performance.

“We had developed good strategies and that paid off for us. I am happy with the way the entire team came together, batting and bowling wise. The fielding was great and that changed the game for us”, says Prasad.

Hosts Maharashtra did not hide their disappointment at the outcome, especially losing out on the advantage of playing on home ground. “We were caught up with the arrangements and that affected our preparation”, admits Anthony John, Vice Captain, Maharashtra Wheelchair Cricket Team. “Karnataka is a tough side and they reached the semi-finals last year too. We tried our best but were overcome by their batsmen and bowlers”.

Maharashtra, however, did make a comeback and beat Tamil Nadu in the second match, with John winning the title of Best Batsman. ‘We lost the first match and came under pressure for the second”, says John. “We planned well this time, strategized and that paid off against Tamil Nadu. We tried our new batsmen and they lived up to their potential”.

There were some important learnings as well for Maharashtra after the tournament. “We need to hone our wheelchair skills which is lacking”, says John. “We have to chase the ball on the wheelchair to stop it and that needs work, especially because many of our players are used to crutches”.

Tournament organizers Para Wheelchair Cricket Association, Maharashtra are happy with the response to the event. “We had a great turnout, much better than expected”, said Nisha Gupta, who was part of the organizing committee. “Bhavan’s College supported us by giving their grounds for free and have promised to do it in the future as well. We hope this the turnout helps attract sponsor support so we can afford better kits and wheelchairs. That will help us reach greater heights”.

ALSO READ:
3 teams in Mumbai battle it out for a spot in T20 national wheelchair cricket final