"We all have a Javed Abidi inside us": Shameer Rishad talks about the Javed Abidi Foundation 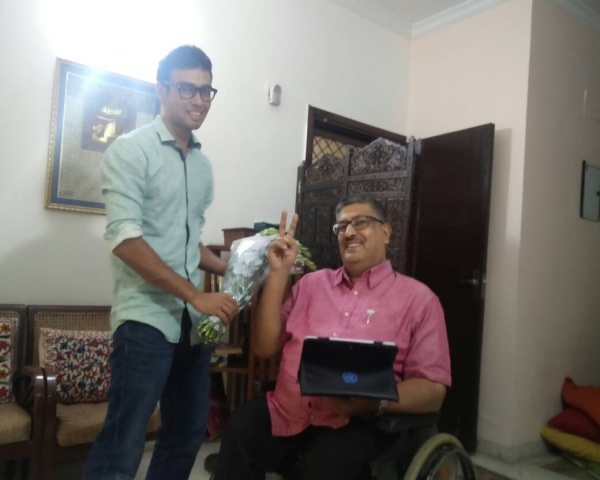 Our Story of the Week is an interview with Shameer Rishad, nephew of the late disability rights activist Javed Abidi, among the leading lights in India’s disability rights movement. Shameer, a law student, talks to NewzHook about his childhood memories of Mr Abidi as well as his plans to start a foundation in his uncle’s name.

NewzHook: Thank you for talking to NewzHook. When did the idea of starting the Javed Abidi Foundation come to your mind?

Shameer Rishad: I would like to let you in on an inside joke that I had with my uncle or as I called him Mammoo but first some context! Mammoo knew he didn’t have much time left and he was very matter of fact about it. The first time we had ‘the talk’ was when I was in Class 8. I remember hugging my mom and sobbing because he meant much more to me than just being my uncle. As I grew up, we did talk about it (death) but it was just the way he put it forward which made it seem less realistic and more of a joke.

Another thing about Mammoo was that his personality brought such an intense energy into the room which was perceived by different people in so many different ways and it would change with what he wanted to achieve at the moment. With the family and especially with me it was just a really fun-loving energetic vibe that he encapsulated. It was as if nothing bad could ever happen and if it did, he would somehow take care of it.

Coming back to the inside joke, Mammoo loved cars and he always wanted to transition to a BMW from his Toyota. I told him that when he passed on, I would buy a BMW so that his spirit can join me! We would both have a good laugh and he would tell me that he isn’t going to leave behind anything for me.

I still wonder sometimes if he would want me to start JAF or is he ok with this decision of mine.

After he left us, I just couldn’t sit, it was more of a calling that I had that words can’t explain. I had to start JAF. I don’t see myself as a disability rights activist or any activist for that matter; I am doing this as a tribute to my uncle because I loved him.

NewzHook: What are the most enduring memories of growing up with Mr. Abidi?

Shameer Rishad: Growing up with him was really normal actually. There is a saying in Hindi ghar ki murghi saag barabar. He was extraordinary yet he was very normal. For me he was the man; in my lingo the ‘big man’! But at home he was Javed Mammoo, the man who would pick petty fights and bully a seven-year-old while cheating at chess and Ludo (I was the seven-year-old). Who does that??? Those are obviously not the most enduring memories I have of him though they are the funniest and looking back, ones that I would cherish for all eternity.

Mammoo and I used to go to the mall where he would spoil me rotten. Before every shopping trip I would have two talks – one with my mom, telling me to stay within limits and not buy anything too expensive and the other one was in the car with Mammoo where he would tell me to go all out. He enjoyed annoying his little sister besides pampering me of course!

There were some trips which have left a mark on me as I would keenly observe him. One such trip was around the time when he was campaigning for access. He told me that a ‘reporter lady’ (journalist) would also be joining us and she would ask him a few questions while we shopped. That is one of my strongest memories of him. He was an action man! As soon as we got out of the car, he wheeled himself forcefully and tried to climb a steep ramp. When he was not able to do so he called me and asked me to push. I wasn’t able to do so either, so he called the driver for help and with much difficulty he made the climb. He then called the manager for the store and Javed Abidi’d his way while the ‘reporter lady’ and I observed. The one thing that got drilled into me that day was the essence that if you feel that your right is being violated or that you are not being treated the way you ought to be, then you shouldn’t keep quiet.

NewzHook – What does the foundation aim to create?

Shameer Rishad – Javed Mammoo was my hero and obviously I looked up to him. Being really close to him and observing how he dealt with situations made me wonder, ‘will I ever be able to do this? Or what would I do in that situation?’ I used to ask him for advice regarding everything and we would talk extensively on really serious topics and completely frivolous ones as well. All these talks always happened after 2 AM as anyone who knows Mammoo, knows his work ethic and how he functioned.

I personally wanted to be the man. I wanted to take his qualities and just be more like him. The way he spoke, the way he dominated the room, the way he dealt tactfully and also with authority and the dabbang style of asking pertinent questions which would completely flabbergast the other person. He wasn’t just a person; he was a force of nature. I wanted that.

The way I see JAF is that we all have a Javed Abidi inside us waiting to come out and s/he just needs an opportunity or a platform to do so. Mammoo also felt that the youth have great potential to tackle issues in fresh and innovative ways. I want the foundation to develop Individuals who want to change the status quo, who want to question, who want to rise up from complacence and take on the world with their head held high. A single man in 25-26 years did so much that people say that nobody will be able to achieve what he did.

The JAF is my personal tribute to the man I loved and looked up to. It is an experiment that I think my uncle would have supported. I am learning a plethora of things about the rights of disabled. My main focus is on the RPWD act of 2016 and using RTIs to keep a check on the proper implementation of the law.

Creating watch dogs in the community

NewzHook – How do you plan to support the community?

Shameer Rishad: In my numerous talks with Mammoo, he always told me that the RPWD Act 2016 was a game changer and he wanted to work towards seeing this path-breaking legislation come into action. I want the foundation to facilitate a process through which young persons with disabilities can become the watchdogs focusing on a rights-based approach through the implementation of the law.

There is a void that may never be filled again but over time through honest and conscious efforts the loss can be made whole again. I always thought that he was ‘legendary’ (in my lingo). He truly was and that’s basically what I want. Won’t it be awesome if we had more Javed Abidis?

The foundation’s first initiative is to work towards providing young persons with disabilities a platform, an opportunity in the form of the Javed Abidi Fellowship. I am very lucky to have a lot of well wishers that love and admire Mammoo like I did, who are helping me work towards launching the fellowship.

I want JAF to reach rural areas as well. With the help of strategic partnerships this can be done. Mammoo had been saying this a lot of late that it was a top most priority for him to work with PWDs living in rural areas and I will take this task on.