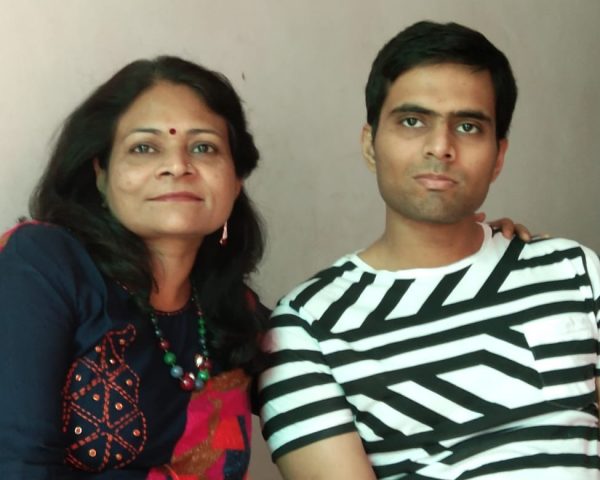 Nothing is impossible for Akshay Bhatnagar, a 27 year old adult with autism who hails from Jaipur in Rajasthan. A student who excels in academics, sports and dance, Akshay shows us how a disability does not have to stop you from chasing your dreams and following your passion. Akshay had to clear many roadblocks throughout his journey to success. But with a lot of love and support from his parents and teachers, Akshay now works for a renowned firm in Jaipur.

Akshay’s mother Pratibha Bhatnagar says that she and her husband Navin Bhatnagar were initially shattered when Akshay was diagnosed with autism when he was just four years old. Initially, the couple were unaware of what autism is. Just like most parents, they struggled to get a detailed insight about the developmental condition.

Until three years of age, Akshay did not speak. That is when we took him to a child specialist who later referred us to a speech therapist who told us that Akshay has autism. We were hearing that term for the first time. In fact, I came home and checked the dictionary to know what autism is. It gave words like aloof and so on as meaning for autism. People were completely unaware of developmental disorders during those times. Things have changed for the better. But we still have a long way to go-Pratibha Bhatnagar, Akshay’s mother

Pratibha left her well-paid government job to reach out to her only son. She says that it was one of the best decisions of her life because she could stand with him through thick and thin. Akshay did his schooling along with children who do not have any disabilities to excel in academics and sports.

Things took turn when Akshay had to be admitted in a college. Most of the colleges rejected him an admission because of his disability. Pratibha filed a case with the state disability commissioner that denial of admissions to Akshay was clearly violation of human rights. The commissioner soon issued an order asking college of Akshay’s choice to admit him without fail. The youngster completed his degree in sociology, political science and public administration.

Akshay was awarded the second highest academic excellence award in college for his remarkable performance. He also became the first person with autism in Rajasthan to complete his graduation. In 2017, Rajasthan state government honoured him with the Incredible Achiever’s award. In 2018, this youngster was honoured with a national award for being a Role Model for people with disabilities. These are just a few of the awards that he has won. Akshay has also won numerous championships in para sports as well. This all rounder is not yet ready to take a break. He wants to keep chasing his dreams.

“According to Akshay, he wants to do what everyone thinks and says is impossible for him. That is what has driven him achieve so much. Our society are unaware of what people with disabilities can achieve. They are not given any self-respect or support. I work closely with many organizations and hence know about disabilities. But imagine condition of parents who are unaware of what their children are going through? It is high time that people are sensitized about disabilities, says Pratibha.

Akshay’s father Navin Bhatnagar did not miss out on any opportunities to motivate and encourage his son.

“We wanted to give Akshay nothing lesser than the best. I believe children with autism can do very well in life of they are given support and guidance from their family, says Bhatnagar.

The words of Bhatnagar surely need to be marked. There is nothing that a person with a disability cannot achieve.