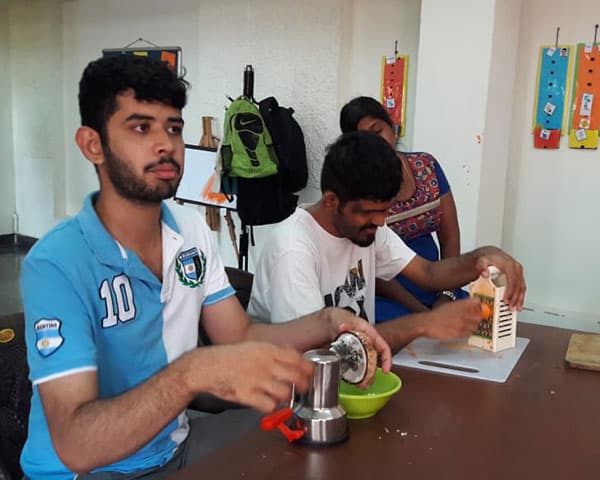 In our month-long series #AutismPower focusing on youth and adults with developmental disabilities, we bring you a story on a college in Chennai called CanBridge Academy.

Her son was about 15 years old when Kavitha Krishnamurthy started thinking about ways in which he could acquire productive life skills after finishing school. It’s the big “What Next question that confronts all parents with children in their late teens. For parents of children with disabilities, that question can be especially overwhelming given there are few avenues once they finish school.

The question triggered some brainstorming sessions with parents in a similar situation and thus was born CanBridge Academy, a college where youth with disabilities could graduate to once they finish school.

Based in Chennai, the college, which is a year old, aims to equip these youth with life and work skills.

When these children leave school, they need a period of training and education before stepping out into the world in a sense. For the first six months after we started, the focus was on getting them reoriented to a class set up as many of them had left school a while back. Then we started consolidated sessions over the next six months where we looked at skills in two-three areas. The focus is on working on their current interests and building additional skills along with that. – Kavitha Krishnamurthy, Founder, CanBridge Academy

The youth are exposed to various skills at stages, including cooking, weaving and art. “They need to see the outcome of what they are doing, says Kavitha. “While learning cooking in school, they are taught to cut vegetables and that’s it. Here, they get to see the end product as well with someone helping them to cook. Finally, the whole group sits together and eats.

Another important skill the youth learn are weaving, which holds future employment prospects as well thanks to a tie up with Shuttles and Needles, a centre for creative textile arts in Chennai. The centre uses Weawin, a fabric which is handwoven by adults with disabilities. Weawin is an initiative of three Chennai NGOs, Vasantham, Maithree and WE Can.

“This way they have access to a platform to market the products, says Krishnamurthy. Once the youth hone their skills, they move into the Weawin team.

Bina Prithveeraj’s son Ahed is among the four students currently enrolled at CanBridge. “Ahed is really happy to go there because he is able to express what he wants to. That is exactly what I was looking for as well, a place where an adult gets to decide what he/she wants to, like we did in college.

Ahed has surprised Bina by acquiring an interest in art, something he showed little inclination for before. She is also happy that he is learning how to cook. “Cooking is a survival skill and I am happy he is learning that. He never used to go to the kitchen at home unless he wanted to eat. Nor do I cook. So, I am happy he has shown interest in it.

Among the most popular sessions in CanBridge Academy are lessons in movement taught by Karunya Jo, a dancer, performer and expressive arts therapist.

“When we started off they would mostly do their own thing, but their ability to observe each other and give space to each other has grown so much, says Karunya. “We do more and more as a group now than at the beginning and they observe and follow movements significantly better. They’ve found new ways to use their bodies. I can see them exploring something new and sometimes they show their joy or happiness in doing something.

Going ahead, Kavitha plans to do much more with art. She hopes to create a studio format like space where students can sell their work. The idea is grow organically as per everyone’s natural flow and rhythm. “It all depends on the child’s readiness to move on, she says.

Check out the other stories in the #AutismPower stories: