Teenager Jordan Reeves’ Project Unicorn gets a thumbs up for creativity 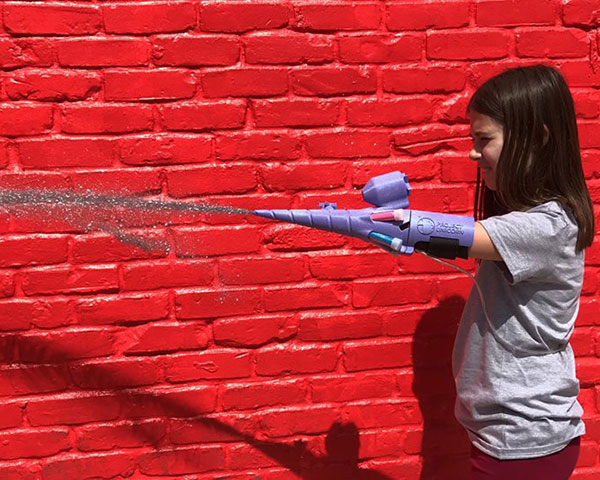 Thirteen-year old Jordan Reeves loves unicorns and glitters. So she decided to do something creative and unique about them. It led her to launch Project Unicorn and within a sort span, it has become a hit.

So, what is Project Unicorn as Jordan decided to label it. Jordan, who has one arm designed a prosthetic limb with a glitter shooting unicorn horn. The glittering canon of her limb can shoot a shimmering cloud up to six feet up in the air and looks super cool. This cutting edge wearable technology wins full marks for being rare and creative.

Jordan’s 3D printed prosthetic arm was unveiled at an exhibit held at the Illinois Museum of Science and Industry called Wired to Wear.

Jordan worked on Project Unicorn for over four months and unveiled it last week. This talented teen decided to look at her disability not as a barrier but a chance to make a creative leap.

Sakshi Chauhan, a para basketball player, uses a prosthetic limb too and loves the idea of wearing something unique like Jordan’s design. She hopes to have designs like that in India too that are cool to look at and reasonably priced.

Artificial limbs are generally very expensive in India so something like Project Unicorn would cost a bomb. The prosthetic limbs we get in India are rather simple. There is nothing unique about them. My Australian coach uses a prosthetic limb with tattoos and it looks so cool! We don’t have all that in India. It is high time that we experiment with creativity for prosthetic limbs so that users can check out different styles and wear them confidently. And it should not be expensive. – Sakshi Chauhan, Para Basketball Player

Like adaptive fashion, cool prosthetic limbs in India will find a large market. The question is, who will step forward to design them? When will we find our Jordans?

Jordan is truly remarkable. She is also the co-founder of Born Just Right, an organization that helps children with prosthetic limbs learn tips to improve their lives. She even has a Stem Squad to her credit, which is a group of girls who use science and technology to accomplish things. Social media users can’t stop tweeting about this remarkable young girl.

“You should definitely tell your kids about Jordan Reeves, who gave herself the superhero name “Girl Blaster and invented a glitter shooting unicorn horn prosthetic arm, tweeted Jessica Walton. Even United States senator Kamala Harris, who is a likely candidate for the presidential elections has tweeted her admiration for Jordan. “Her latest work will ensure young people with disabilities have dolls that look like them.”

India too has a big wide open market for cool designs for people with disabilities that is waiting to be tapped. Who is going to step forward, that is the question.