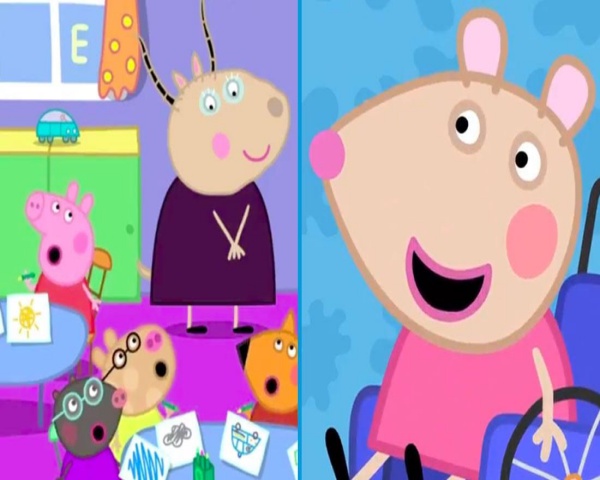 What’s there to not love about Peppa Pig? The popular kids show with its many animal species ranging from ponies to elephants and pigs touches a chord with children worldwide. Now, it has won even more fans with its most recent character Mandy Mouse, who uses a wheelchair.

Mandy was introduced to the scene last week on the official Peppa Pig Twitter feed with the caption: “Squeak! Introducing the newest member of the playgroup, Mandy Mouse!” Attached to this was a video of Mandy being introduced to the playgroup by Madam Gazelle who says: “Children today we have a visitor… Mandy Mouse.” Mandy Mouse then enters the room with her mother and says: “Hello Everyone, squeak.” The class says returns the hello in a big chorus.

The simplicity of that introduction was the winner for Jo Chopra McGowan, Co-founder, Latika Roy Foundation. A voluntary organization based in Dehradun, Uttarakhand, the foundation offers specialized services and support to families and children with disabilities.

“I love the way Many Mouse is brought in, so naturally, with no major build up or announcement. It seems so natural, so right. And this is how children with disabilities need to treated, They are already there and they don’t have to be introduced, says McGowan.

The clip, 15 seconds long, has been shared by many parents, some whose comments reveal how profoundly Mandy Mouse has touched lives.

Among those who posted a comment was also a 29-year-old wheelchair user. “Well done! With love from a 29 year old wheelchair user who will now be watching Peppa Pig avidly.” Another parent said, “I could cry! My daughter loves Peppa and has a neuromuscular disorder. This is a game changer. Thank you!!!!!!”

Among those to tweet her happiness at this move was Rati Misra, Advisor, National Centre for Promotion of Employment for Disabled People (NCPEDP) who said “My nephew’s favourite show! Introducing disabilities at this stage helps makes it just so ‘normal’ for them! Instead of the ‘mainstreaming’ efforts at a later stage.

Vinayana Khurana, a student blogger and wheelchair user based in New Delhi, said she would encourage her friends to watch the show.

This is not the first time a popular children’s book has portrayed characters with disabilities. Sesame Street introduced Julia on the autism spectrum a few years ago. Then there is splendid line up of characters in the Marvel series created by the legendary Stan Lee.

In doing so, they have made an invaluable contribution, says Anupama Bakhshi, parent to a child on the autism spectrum. An English subject expert, Bakhshi recalls an incident when she created a sample lesson for Class 3, in which she had included a character with a disability.

“The note that came back, from a well-established publishing house, mind you, was that some of the material was ‘politically incorrect ‘ and not ‘sensitive’. I never really recovered from the quandary I was thrown into. The presence of a wheelchair bound child in a young child’s learning space is not sensitive and not politically correct? Are we blocking out neuro-diversity and special abilities from the lives and mediums of knowledge of little children and creating an idyllic world of ‘perfection’ for them? Does it make the neuro-typical world uncomfortable? she asks.

Bakhshi, who refused to change her lesson, says it’s high time these differences were acknowledged in India in mainstream popular works.

“It’s about time we ruffle some feathers and accept and acknowledge differences around us! And the children are sensitized and made aware. Without that, we cannot blame them for being insensitive peers and bullies later on. She celebrates the growing visibility of wheelchairs and sees in this the signs of a brave new world. “One where no Wonder kids will have to wear helmets and no Mandy Mouse and the like will have to face alienation.

ALSO READ:
What made Stan Lee’s superheroes so magical for children with autism