Anybody Can Paint helps visually impaired people find the artists within 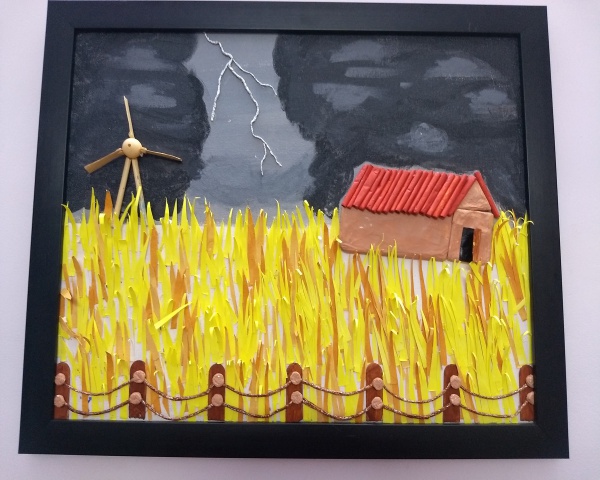 The magic of touching brush to canvas is something Sanya Hameed had never thought she would ever experience as a visually impaired person.

“I lost my vision when I was about seven years old and until then I had never painted, says Hameed, who is based in Hyderabad. “After I went blind, I gave up on the idea completely. I didn’t think painting was meant for people like me.

So, when Hameed heard about a day-long painting workshop on the theme of landscapes at the L V Prasad Eye Institute (LVPEI), she was astonished. “Painting for visually impaired? Impossible, I thought. Sanya overcame that skepticism and signed up with a friend. The experience, she says, was mind blowing.

“I had heard of creative people, but I never thought it could be me, she says the wonder evident in her voice nearly a year after she attended the workshop. “I painted a landscape using tactile materials like a glue gun to form mountains and trees. Just holding the brush and exploring with it felt amazing, I didn’t even know there were different types of brushes!

Bringing this experience alive in such rich and varied ways is the initiative Anybody Can Paint the brainchild of Sameer and Harsha Nagi. An avid painter in his spare time, Sameer and his wife decided to give up their corporate careers to focus on helping people discover the therapeutic side of art.

Sameer was always looking to give back to society, not just exhibit his work but also decode the art of painting, while I wanted to leverage my skills to do something creative, fun and insightful. We did a pilot where we asked people to create art in 90 minutes as an exercise to help them overcome self-limiting beliefs. We wanted to make people question those beliefs and realize that given the right training, Anybody Can Paint. – Harsha Nagi, Co-founder, Anybody Can Paint

After several corporate workshops, they decided to connect with the LVPI to conduct a session with visually impaired people on a trial basis. “The aim was to think out of the box and leverage some basic skills of empathy, says Harsha. ‘We realized that we can create an interesting twist to the process and ideate on the canvas itself.

This led to some interesting processes like using glue to create a surface on canvas and using props to evoke a 3-D experience. The experiments have led to some pretty amazing experiences.

“One such experiment done in the same week involved a group of techies from Microsoft who created a certain painting and the same was created later by a group of visually impaired girls from a school, recalls Harsha. “It was quite mind blowing how the girls listened to the instructions and logically followed the process.

These experiences have encouraged the Nagis to conduct such inclusive workshops in partnership with government schools. “Apart from acrylic colours, we use tactile materials like hot guns, thread, thermacol, etc. It all depends on what the painting is about and which tactile form would suit it best.

The workshops have given T V Aishwarya, a late blind person, the confidence to pick up the brush again. Unlike Sanya, Aishwarya was an accomplished painter before she lost her vision at the age of 19. “I had given up on the idea of painting and thought I would never be able to paint again. After I met Sameer and Harsha, I understood I can still hold the brush and start painting once again. They got me back to painting and a thank you is just not
enough.

Aishwarya loves the little details that go into making the workshops such enriching experiences. “Sameer and Harsha gave us an overview about the colours and the meanings, even using fragrances for each colour, like lemon for yellow, rose for red, etc.

For both Sanya and Aishwarya, the workshops have opened doors to worlds they never imagined, at the same time enabling and empowering them. “I feel there is nothing in the world that visually impaired cannot do, says Sanya. “It has made me feel creative and independent.