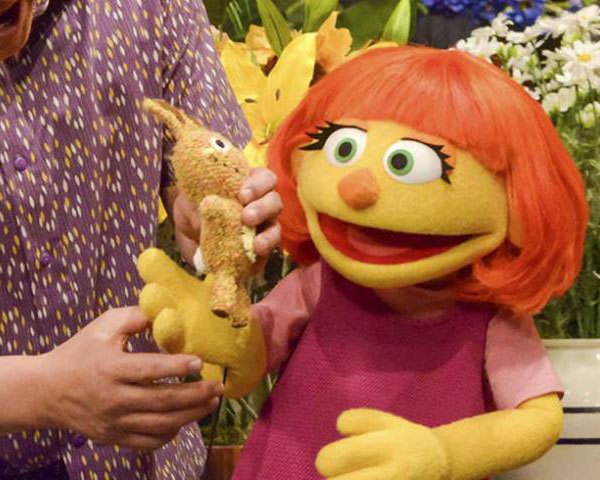 April is celebrated as Autism Awareness Month across the globe. Disability rights groups are holding various programmes to promote awareness. Popular American TV series Sesame Street which introduced Julia, a character on the autism spectrum two years ago, has been doing something special in honour of the month.

Throughout April, the family of the four-year-old muppet has been a part of the shows regularly. Julia’s parents, big brother, and companion dog all make an appearance, focusing on what all families share in common while providing tools to help overcome everyday challenges.

One of the shows featured Elmo, Abby Cadabby, and Alan as they helped Julia feel less scared about getting a haircut by playing ‘hair salon’ and pretending to be hair stylists. The segment was created in response to a need families felt for materials tackling common experiences like haircuts that can pose challenges for children with autism. In another video, Julia and Samuel teach Abby Cadabby a new kind of hug to help her through a tough day. In another episode, Julia stands up for another camper with autism who is being bullied, and the two become friends. Children with autism are five times more likely to be bullied than their neurotypical peers.

Sangeetha John, parent of a child with autism, loves the approach.

In India, we have cartoons like Chotta Bheem where the main character is epitome of strength and perfection. Introducing characters like Julia helps siblings and peers of children with autism to understand more about the developmental disorder. It will influence them in a good way. Even today, many children with disabilities undergo bullying in schools. Having a cartoon character is the best way for children to identify what autism is. –Sangeetha John, Parent of child with autism

The makers of the muppets have worked together with other artists, writers and puppeteers to know in-depth about how to portray Julia on-screen. Some of them even befriended kids with autism to know them and their needs better. Undoubtedly, they did great work!

Autism Speaks and Sesame Street has developed various print and online ads that direct audience to a website that provides more details about autism spectrum disorder which will be available in both English and Spanish.

Social media users congratulated the team of ‘Sesame Street’ for their bold step to promote inclusion, acceptance and understanding.

“Just watched Sesame Street episode Julia’s Haircut. Thank you @sesamestreet for such a great depiction of a child with autism Can’t wait to watch it again with my 4 year old and talk about it! #AutismAwareness, tweeted Renee.

‘Sesame Street’ was launched in the late 60’s. It was introduced online in 2015 and later developed as a TV series in 2017. Galli Galli Sim Sim, is the Hindi adaptation of ‘Sesame Street’.