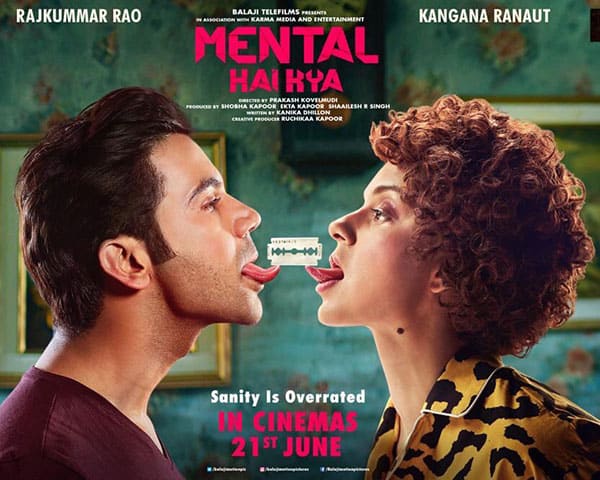 This ‘blade’ scares me! The picture is a teaser from the movie, Mental Hai Kya. The picture has shocked and surprised mental health professionals! Teasers are meant to draw attention but this takes the cake. ‘Shock and Scare’ to bait a million eyeballs is the philosophy.

Well-known psychologist Smriti Joshi said, “I and a few other psychologists and activists did try getting in touch with the producer/director via Twitter etc., but were ignored…the posters are triggering and reflect self-harm and complete insensitivity to people who may have mental illness”.

There are other pictures that may be termed offensive like chopper cutting an apple and blood trickling down. It looks gory! None of us has seen the movie and many mental health professionals are concerned by the content and the insensitivity displayed by the posters.

Dr Soumitra Pathare reminds us of Section 92 of the Rights of Persons with Disabilities Act, which says: “Whoever intentionally insults or intimidates with intent to humiliate a person with disability in any place within public view..shall be punishable with imprisonment for a term which shall not be less than six months but which may extend to five years and with fine.”

Is this Section violated by the movie? Time will tell after it is released!

The title, ‘Mental hai kya’, is provocative and in my opinion alarming. It appears humiliating and deriding of the mentally ill. In an era where one is fighting the ‘stigma’ against mental health and are helping accept the term ‘mental health’, mental health awareness’ or mental illness this title comes as a shock.

One in eight in India are mentally ill according to recent statistics of the National Institute of Mental Health and Neurosciences (NIMHANS). National Crime Records Bureau (NCRB) figures talk about the increase in suicides across the country, more so among the youth. And in this backdrop the title and the images have a condescending stench.

Veteran film journalist Bhawana Munjal shares that the film may be wanting to say, ‘mental is the new cool’! Whatever it is , ‘The feel is not good’, but one needs to see the film to make a final judgement. Yet the teasers are honestly disgusting and derogatory!

Politicians also abuse their opponents by throwing the word, ‘mental’ on them. None of them abuse their opponents with words such as, ‘diabetic’, ‘asthmatic’, ‘epileptic,’ etc. Artistic license is an oft repeated comment we hear from the ‘palaces of creativity’, but has this film crossed the line?