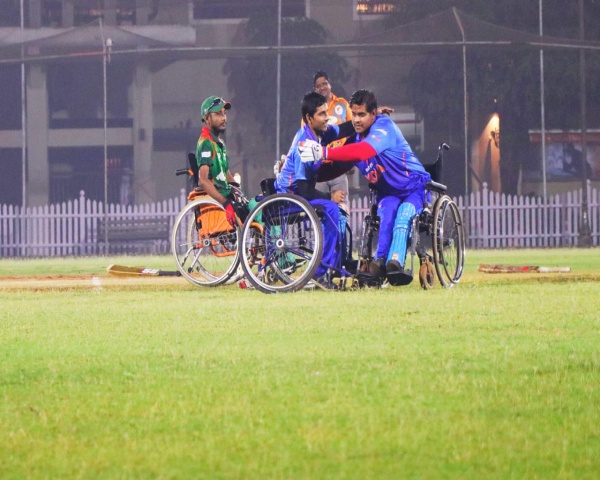 The Indian wheelchair cricket team is gearing up to put up a splendid performance in the upcoming T-20 series. Delhi and Chennai had already been the hosts for this tournament, and now it is Kolkata’s turn.

Apart from India, Nepal and Bangladesh are also taking part in the tournament. Pakistan was invited too but due to visa problems, their players could not take part. The Indian wheelchair team, that has showcased their talents in various national and international tournaments claims that they are going to settle down for nothing lesser than the first place.

The matches will be held from 26 to 28 April at the famous NKDA Stadium at New Town in Kolkata. The event is organized by the Wheelchair Cricket Association of India patronised by the Sports Ministry. To add to the glamour of the event, Indian Premier League Kolkata Knight Riders (KKR) team members are also expected to come and watch India’s wheelchair cricket talents.

Somjeet Singh, Captain, Indian Wheelchair Cricket, team says that his team has been undergoing rigorous practice sessions for the past many days. They hope to put up a good performance with all the team members being in good form.

Our team had recently participated in the national tournament which has given us enough practice and confidence to face this tournament as well. We have seven new players in the team who have been identified after their brilliant performances in the nationals last month. Currently, we are undergoing a cricket camp at Kolkata which will help us prepare better. Basically, we want to work together and put up our best performances.- Somjeet Singh, Captain, Indian Wheelchair Cricket Team

The team will have members from Karnataka, Tamil Nadu, Gujarat, Madhya Pradesh, Punjab, Chhattisgarh, Haryana and Delhi. Rules of this T20 wheelchair cricket will be similar to the cricket played by people without disabilities. The wheelchairs that the cricketers will use to play have been specially crafted for the game.

“This tournament is going to be more of a preparation for the upcoming Asia cup. We will play two matches against each team before entering finals. All the matches are scheduled to happen in Kolkata itself. We currently have 16 members in our team and we have to make it to 11. We have been undergoing rigorous practice sessions and is confident of winning the match, said Shivprasad S, Vice-Captain, Indian Wheelchair Cricket Team.

The Indian wheelchair cricket team squad is confident of bringing out their best for the upcoming series. Now, we are waiting to see them bring home the cup.