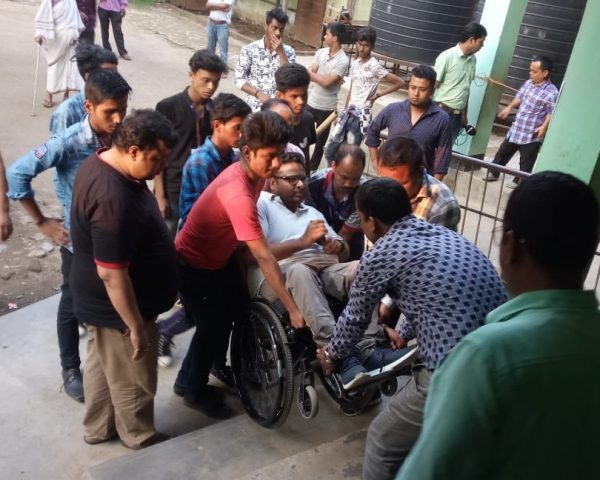 If there is a defining image of the Election Commission of India (ECI)’s Accessible Election campaign, it would be this.

This is a video of Arman Ali, Executive Director, National Centre for Promotion of Employment for Disabled People (NCPEDP) , being physically lifted on his wheelchair by a group of people to a voting booth on the first floor of a building in Gauhati.

The video and images, shared by Ali on social media, have gone viral, making a mockery of the ECI’s claim to ‘Leave No Voter Behind’.

Ali says that he went to the polling booth in Gauhati where he was registered, Booth Number 156, in the early hours to find that the station was set up on the first floor of a building, which is a primary school. He waited outside for assistance, but got none.

There were no facilities for voters with disabilities at the booth. There were three polling booths in the same place and the one on the ground floor was accessible but my station was on the first floor. There was none who was sensitised on disability or how to assist a person with disabilities. I sat under the sun for hours and no one from the polling booth came forward to help until I notified the Chief Electoral Officer Assam and the media. – Arman Ali, Executive Director, National Centre for Promotion of Employment for Disabled People (NCPEDP)

Ali says that the booth level officers manning the station offered no assistance of any kind. It was only after the CEO Assam’s intervention that they asked him to return in the evening to cast his vote.

When he returned, he was lifted to the first floor by a few people so he could cast his vote. A frustrated Ali took to Twitter to share his experience — “So finally this is how I was able to cast my vote at 4:55 pm. It took 2 visits. I had to wait for 2 hrs in the sun. what sham in the name the name of accessible #2019Elections Devine indeed!

Ali’s is not an isolated experience. There have been many instances of people with disabilities across many polling stations being physically lifted onto upper floors of buildings to cast their votes. Given the entire effort put into setting up a PwD App for the express purpose of mapping disabled voters so their needs can be catered to, one wonders what went wrong.