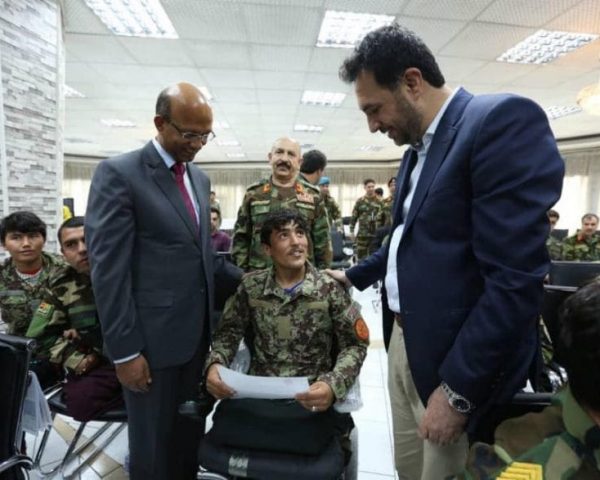 Friendship knows no boundaries and in a wonderful gesture of solidarity and understanding, the government of India handed over 100 modern and electric wheelchairs to soldiers of the Afghan National Defence and Security Forces who lost their limbs fighting for their country.

According to a statement, 100 electric wheelchairs were handed to war veterans who lost their limbs fighting against terrorists.

Major (Retd.) DP Singh, who lost his leg in a mortar fire during the 1999 Kargil war and is well known as India’s first blade runner, says the gesture is the sign of a good neighbour.

Our Indian government has always taken utmost care of war veterans. Now, they have extended this to our neighbours as well. This current gesture must be much appreciated. –Major (Retd.) DP Singh, Blade runner

Afghanistan, one of the countries worst hit by terrorism, is still fighting hard to get back to normalcy. India has donated over US$2 billion dollars towards the reconstruction of the country and also towards improving its infrastructure. During the visit of President Mohammad Ashraf Ghani to India in 2016, another US$1 billion was promised for reconstruction.

Over the years, India and Afghanistan have formed a great bond and this latest gesture of providing wheelchairs to their war veterans will help improve relations between both the countries.

“Indian government has always been kind towards war veterans. The latest gesture shown towards Afghanistani war veterans is truly a way of boosting our international relations and establishing goodwill in a global platform, says Jomy Joseph, a disability rights activist.

Till date, at least 4,800 soldiers from Afghanistan have been trained by the Indian defence through various programmes. This will truly be of great help to Afghanistan who have already lost thousands of soldiers to their war against terrorist groups like Taliban and ISIS.

Many people took to social media to congratulate this gesture of the Indian government.

“India on Monday handed over 100 modern and electric #wheelchairs to the soldiers of the #Afghan National Defense and Security Forces who have lost their limbs while serving in armed forces ranks. We highly appreciate those who assist us in #Military sector, tweeted Sayed Naseem Sadat.

“India gifts 100 motorized wheelchairs to the Afghan National Army for use by injured soldiers. Army says it has trained 4880 ANA personnel till now in different fields, including doctors and medical technicians, tweeted journalist Manu Pubby.

Apart from providing the wheelchairs, India has promised medical assistance and relief to war heroes of Afghanistan.