I would rather scale Mt. Everest than buy a car – Guest column by Vishant Nagvenker & Monika S Kshatriya 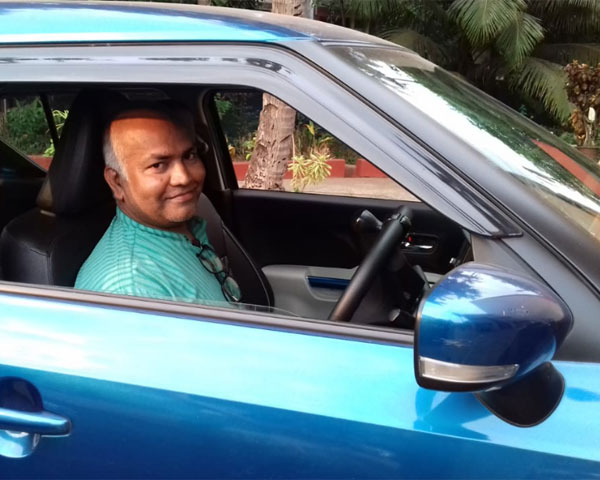 Our guest columnists this week are Vishant Nagvenker, a statistician in the Department of Tourism, Goa Government of Goa and Monika S Kshatriya, a journalist and filmmaker. The two are part of iDare (Initiative for Disability Awareness Rights and Empowerment) in Goa.

For most people a car is not just a mode of transport, it’s a display of their aspirations and success. But for me, it’s a lifeline. I have 75% disability in both the lower limbs. Getting from home to the bus stop or a taxi stand is a near impossibility, not unless I want to risk injury due to potholes, damaged roads, mutilated footpaths. In any case, in the absence of accessible public transport I need a motor vehicle to commute to office. For a person with disability, a private vehicle is a basic necessity.

I purchased my first car Maruti Wagon R in 2009. It had a manual transmission and was quite inconvenient. Fed up with its numerous problems and expensive repairs, I decided to buy a new car with automatic transmission.

After a brief search in September 2017 I found out that Maruti Udyog Limited was manufacturing cars with automatic transmission. It was quite inexpensive and accessible. Being a disability rights activist I was aware that there are two types of concessions available on purchase of car for a person with disability: (1) Total Exemption of Road Tax, and (2) Concession in GST and Compensation Cess.

Enthused by the prospect of a new car I approached the Goa Medical College (GMC), Bambolim, for a medical certificate certifying my drive-worthiness. That experience in the hospital was humiliating and frustrating, to say the least. GMC demanded that I display my disabled body in a photograph. That meant I had to strip down and get photographed. I felt like a person in a concentration camp. I submitted my forms and few days later went to inquire again. My application couldn’t be found. After hours of cajoling and pushing, the clerk began a search and found my application in an old dusty file hidden in some corner of her untidy desk. There was no apology, and worse, GMC did not issue me my medical certificate.

I then approached District Hospital, North Goa. Thankfully, the certificate was issued on the same day of the visit.

Simultaneously, I wrote an email to Maruti India Ltd., asking them for the manufacturer’s certificate as mandated by the Directorate of Heavy Industries, in its old guidelines. The application was rejected by Maruti stating that their car was only suitable for persons with left leg disability.

“This condition does not require or state that the particular car should be specially designed or manufactured for use by the physically handicapped persons. In fact, the whole emphasis appears to be more on the end-use rather than the nature of the product itself. Therefore, so long as the car has some special features and an officer, not below the rank of Deputy Secretary in the Ministry of Industry clarifies that the particular car is capable of being used by a handicapped person, concession can not be denied.

As if that wasn’t frustrating enough, officials at Transport department displayed even lesser understanding of issues. I made an Application requesting for Certificate in Annexure — G (old guidelines). But they rejected it orally, saying that they needed to inspect the car before issuing the certificate since the car would be retrofitted.

It was a strange chicken and egg situation. The new guidelines required me to get a certificate from the RTO for a car I wanted to purchase and retrofit. And here the RTO demanded to see the car that I had not purchased yet. Nearly six months after embarking on this “car purchase adventure, frustrated and desperately in need of a transport, I purchased it without any concession from Chowgule Industries, a Maruti dealer in Panjim on 14 March, 2018.

Getting the delivery of the car was another ordeal. The car needed to be retrofitted before registration, so it could be certified by the RTO as an Invalid Carriage. But, how could I take the car to a mechanic to fit the hand controls without registering it first? After a lot of brainstorming, I managed to get a mechanic to fit the hand controls at the Maruti dealer’s office itself. Finally, the car was registered as an Invalid Carriage, and I got the 50% discount on the car insurance, as mandated by law.

Now I was a proud owner of a new Maruti Ignis! But my travails were from over. I embarked on a GST refund journey which was no less torturous. I submitted an application in April 2018 to the Directorate of Heavy Industries, New Delhi, with a request to issue GST Concession Certificate. The certificate was issued to me within a month. I then filed a refund claim with numerous authorities. Since the procedure, or authority, for the GST refund claim has not been defined in GST notification, I chose to submit to all possible GST authorities.

However, the Offices of the Commercial Taxes, Panaji, Goa and the Deputy Commissioner CGST, Panaji rejected my GST refund claim. The reasons they gave were flimsy and in clear violation of the concession offered to PwDs.

Aggrieved with the rejection of my claim, I filed an online petition on CPGRAMS. They responded, requesting CGST to guide me to approach the Car dealer for a refund claim. I then got another jolt when Chowgule Industries, the car dealer, rejected the claim.

I was infuriated by the apathy and lack of knowledge of officials both in the public and private sector. What kind of education makes people blind to rules. I was then even more determined to get what was rightfully mine.

In November 2018, I filed an appeal before the Commissioner Appeals CGST & Customs, Panaji. The order was passed by the Commissioner Appeals directing me to file a refund claim in the prescribed GST RFD 01 Form, which I promptly did. And lo and behold, a full year after my refund journey began, in April 2019, a payment advice was issued to me. Though the refund amount has still not been deposited in my account, I am keeping my fingers crossed.

Perhaps I am the first person with disability who has managed to get a refund of GST on my vehicle. This article cannot begin to express the bureaucratic quagmire I have had to wade through, and the year-and-a-half of emotional roller coaster I experienced. The money is hardly an issue. What’s of bigger value is the sense of achievement and having set the right precedent.

There’s a lot in the rules that needs to be rectified. My organisation, iDare, intends to take up the matter with various authorities. For the moment, I am basking in the glory of my victory and busy maintaining my car. After this ordeal, I would rather climb Mt Everest than buy a car!