#AutismPower-Arts or sports, Niranjan juggles them with ease 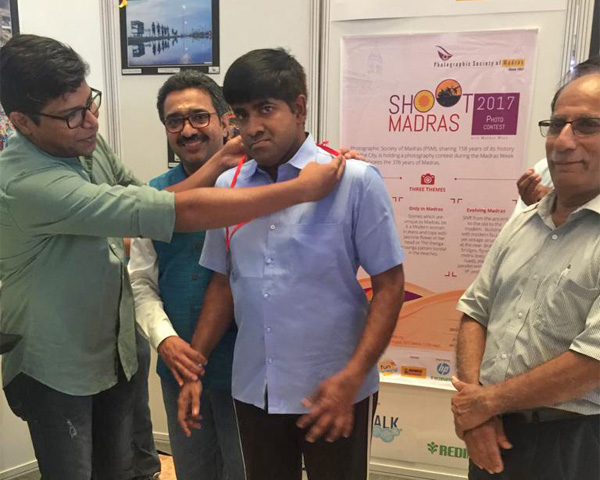 Niranjan shows as much grace and sensitivity with his fingers as he does on his feet. A superb skater, he is wowing audiences with his pictures as well.

When 33-year-old Niranjan Ravi picked up a camera a few years back, little did his mother Rama Mani Ravi imagine how far he would go. He has participated in many photo shoots and exhibitions and won the second prize at an exhibition held by the Madras Photography Club.

Niranjan, who is an integral part of the Chennai-based art group Sangamam, has showcased his talent at the Outsider Art event at the Kochi Muziris Biennale as well.

This is just one of the things he excels at. Niranjan has also won three gold medals at the Special Olympics for roller skating. In fact, he loves to explore all sports.

I believe that his greatest achievement is not winning gold medals or other laurels. It is the fact that he is independent to a large extent and is able to mingle and interact with others. He has come a long way and that makes us proud of him. I know that it is often difficult for parents to accept their child’s disability. The faster you accept it, the better you would feel. Just do our part and let the rest of your life flow like a river. Trust me, it is beautiful. Understand your child because they need you throughout. – Rama Mani Ravi, Niranjan’s mother

Niranjan loves to explore the world of art as well and paints some remarkably beautiful pictures. This young man is an integral part of the family business and handles the administration section in his father’s office. Rama Mani says that her son is very happy to work with new things.

“When he was a year old, I knew that he was a child with special needs. He was diagnosed with autism at the age of five at the National Institute of Health and Neuro Sciences (NIMHANS) in Bengaluru”, says Rama Mani. She had read about autism but didn’t know much about the nature of the disorder. “Unlike today, during those days there were hardly any books or materials to study in-depth about autism. Today, he is 90% independent and I am glad he has come a long way.

Niranjan’s teacher and close family friend Padmavati shares the same sense of pride. “I know him from the time he was a kid. He had many problems but has overcome them to become successful. As an artist and as a sportsperson, Niranjan has shown immense growth, says Padmavati.