Vishnu wants to break barriers to promote his campaign #signlanguagemovement 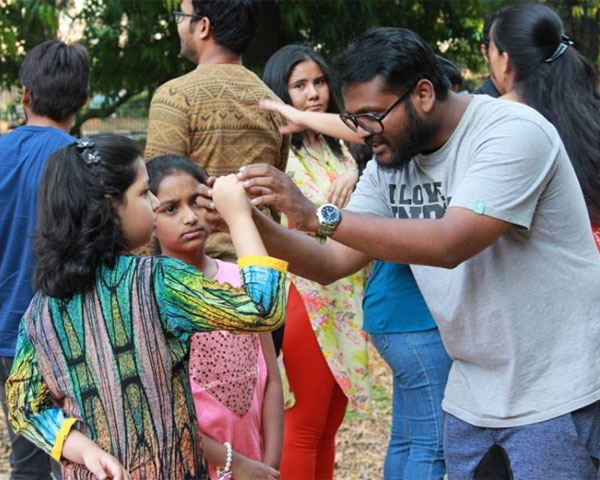 For Vishnu Soman, founder of NGO Smiley’s in Bengaluru, Indian Sign Language (ISL) is close to his heart. Soman has been learning sign language for the past four years, purely out of curiosity and passion. After he started Smiley’s, he started interacting more with deaf people and that became yet another reason for the youngster to get close to ISL. Soman is taking his love for ISL to the next level. He has started an online campaign with the hash tag #signlanguagemovement where he would share one word per day so that those interested to learn it can easily do it by just being a part of his social media account. Ever since he started it a couple of weeks back, Soman has been getting great response.

Vidushi Jayaswal, who works along with Soman, had started Sign Lab to promote Indian Sign Language through various videos. A venture of Smiley’s, ‘Sign Lab’ made a huge impact amongst its volunteers and Soman realised that it is time to spread awareness about its importance. Hence, #signlanguagemovement was kick-started.

I post videos and pictures on my Facebook and Instagram accouts to promote sign language. I want to reach out to at least 50,000 people by the end of this year. #signlanguagemovement is basically anything that promotes the sign language amongst youth. I have always found sign language very interesting and fascinating. This can be used as a tool to communicate even amongst those who are not deaf. Language must never be a barrier. There is uniqueness in sign language-Vishnu Soman

Soman’s tryst with ISL started when he used volunteer for the NGO Enable India in Bengaluru. He recollects that it was difficult to crack it initially. But he wanted to pursue it at any cost due to his love and passion for ISL. He learnt it from another volunteer at Enable India and they used to learn one sign per day. Once he started Smiley’s, ISL was an integral tool to communicate there as well.

Apart from posting sign language videos on social media, Soman has many plans to promote sign language including starting an awareness sessions and programmes in Kochi and Trivandrum. Soman is tying up with colleges so that sign language can reach a wider audience. Christ University in Bengaluru is already keen to become a part of this programme.

Soman also plans to do a road show from Kasargode to Kanyakumari in Kerala. He hopes that this road show will spread awareness of sign language amongst more people in the state.

“ISL is a great way to enhance communication skills of people who are not deaf. If my planned road show goes well in Kerala, I will do it in other parts of India as well. Right now, I want to do all that I can to promote ISL and break barriers, says Soman.

Thanjani M, who was a volunteer with Smiley’s, has been closely following Soman to learn the ISL.

“I have been getting close to ISL ever since I was part of Smiley’s. Vishnu does a great job in promoting it and also helps other people know ISL. Since I travel a lot for work, I do not get time to go for ISL classes. Hence, something online is of great help to me so that I can learn it from any corner of the world. Since the last five months, I have been closely watching videos to learn it, says Thanjani.

Soman is not leaving any stone unturned to ensure that ISL is spread far and wide amongst the youth in India. His #signlanguagemovement is already garnering a lot of attention on social media.