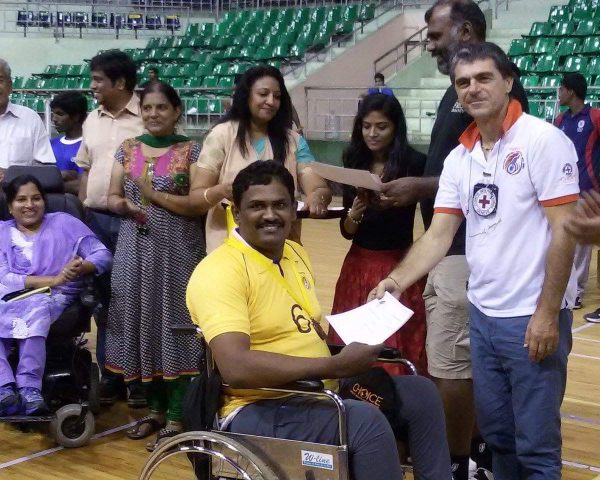 When Riyas NP met with a bike accident when he was 25 years old, little did he know that the incident would change his life forever leaving him with a spinal injury. Until then, just like any youngster of that age, he had just started exploring new things. After the accident, Riyas had to start using a wheelchair. But that did not break the spirits of this youngster. Riyas, who was always interested in sports, decided to take it up full-time to come out of the trauma of his accident. Today, he is a part of the wheelchair basketball team of Kerala. He plays wheelchair cricket and is all set to take it up professionally.

Riyas, who hails from Kozhikode in Kerala, says that his family consisting of his mother and wife are his biggest supporters. They have been with him through thick and thin so that he can put up his best performance at basketball matches. Riyas and his team members have won many laurels for their state. They are now gearing up for the upcoming state level match that is scheduled to happen in June. Riyas brims with excitement when he talks about his love for sports.

We are currently practicing for the upcoming state level match that will happen in Ernakulam. Out team has been undergoing rigorous practice sessions for that. I started playing wheelchair basketball after attending a sports camp that was held in Ernakulam. That is when I realised that I have a passion for this sport and that I must take it to the next level. I’am glad that I did it because that is from where I got selected for the state level team-Riyas NP

Apart from being an ardent sportsman, Riyas run a shop near Kannur along with his friends. He says that their wheelchair cricket team is still struggling for funds without which they cannot take it to the next level. Currently, they have a lot of support from Palliative care NGO’s. They have already played many friendly matches at various events across Kozhikode.

“As a team we are undergoing struggles to fund our sport. But we are sure we will find a way. When I started playing wheelchair basketball, many people told me that I should not be doing it. Instead, I must just stay indoors. But I believe that when we have a passion towards something, we must follow it. Rest everything falls in place. Just because you are a wheelchair user, there is nothing that you cannot do, says Riyas.

Robin Thomas has been volunteering with Riyas and his team for the past few months. Thomas says that Riyas has always been an inspiration for his team members and to other volunteers as well.

“I cannot put down in words how Riyas has inspired all of us through his grit, determination and hard-work. He still undergoes numerous struggles. But his love for sports knows no limits. It is great to watch him play, says Thomas.

According to this youngster, it is high time that the central and state governments work together to make sports venues and grounds more accessible for people with disabilities. Currently, para sportsmen in Kerala are unable to even access grounds and other sports venues due to lack of accessibility. Without the support of the state government, these talented para sportsmen are unable to come out to showcase their talents.

ALSO READ: Nothing comes in between Sakshi & her love for sports