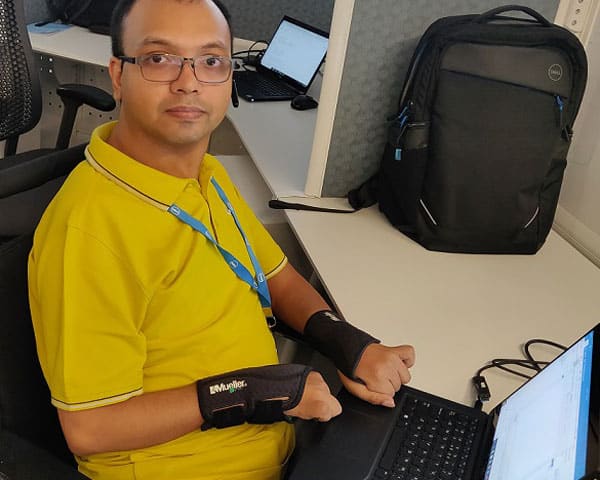 Our Story of the Week on NewzHook is about a petition that has been started by Ashwin Karthik against reality TV shows on the grounds that they are biased against people with disabilities.

Like many other Indians, Ashwin Karthik S N is hooked to the well known reality TV game show “Kannadada Kotyadipati”, the Kannada interpretation of Kaun Banega Crorepati (KBC), the show that is based on the British programme Who Wants to Be a Millionaire?

Kannadada Kotyadipati is a game show in which the host asks contestants a series of questions based on general knowledge and current affairs with the winner walking home with cash prizes.

For years Ashwin Karthik, an engineer who has cerebral palsy, had been dreaming of taking part. He is such a fan that he has ensured he has not missed a single show that is aired on the channel Colors Kannada. Ashwin registered his details and answered the everyday questions that are asked for selecting contestants as per the show’s format.

Ashwin could not believe his luck when he finally received a call from the makers of the show. But what should have been a moment of celebration instead turned quite bitter. Ashwin’s speech is slurred due to his condition and this can affect the flow of conversation. So, while speaking to a KBC representative on the phone, Ashwin mentioned his disability. However, after a few attempts to collect his details, the representative disconnected the call.

Cerebral palsy-CP is a group of permanent movement disorders caused by damage to the brain or abnormal development of the brain. CP impacts the ability of a person to control muscles, physical movements and speech.

Another representative called back after some time and the ordeal continued for Ashwin as he was asked to enter his details using the phone keypad. For Ashwin pressing the keys on phone keypad takes a lot of effort and time due to his medical condition.

The show’s calling system is automated and requires the responses to be entered in a fixed time and since Ashwin was taking more time, the call disconnected. This left Ashwin, heartbroken and disappointed and he felt let down by the technology that has no consideration for people with disabilities.

This is where I felt discriminated and excluded. Here, the money or fame I could have won if I had reached the celebrated hot seat is not the matter of concern. But the sense of achievement that I would have felt if I had succeeded in my attempt would have made a very great positive impact on my personality. I also could have set an example to others. The advent and improvement of technology allows to improvise traditional ways of communication and provide equal opportunities to all, with so much ease. The above described situation could be so easily handled by just sending a secure web link through SMS or e-mail and asking selected participants to provide the required details. But no such attempts are being made. – Ashwin Karthik, Engineer

Instead of feeling sad about the incident, Ashwin has decided to bring about a change by starting an online petition under the heading – Discrimination and exclusion for people with disability in reality shows.

Ashwin hopes to get support so other disabled people don’t feel let down. Ashwin is the first quadriplegic cerebral palsy student in India to get an engineering degree. He is a poet, writer and has won several awards for his various achievements.

Jasmina Khanna, a Mumbai-based software tester, shares her sense of outrage as well and believes the petition is an important one.

“It is unfortunate that technology is not being put to good use to break barriers and create inclusion”, says Jasmina. “Reality TV show makers should be using apps for collecting data and asking contestants to register. They should also increase the time limit for entering responses on phone keypad as many disabled people have mobility issues. There is a great need for sensitization as well among people.“

Jasmina believes the petition underlines an important point, namely that people with disabilities do not need pity and sympathy, only equal opportunity and the right to be treated with dignity.