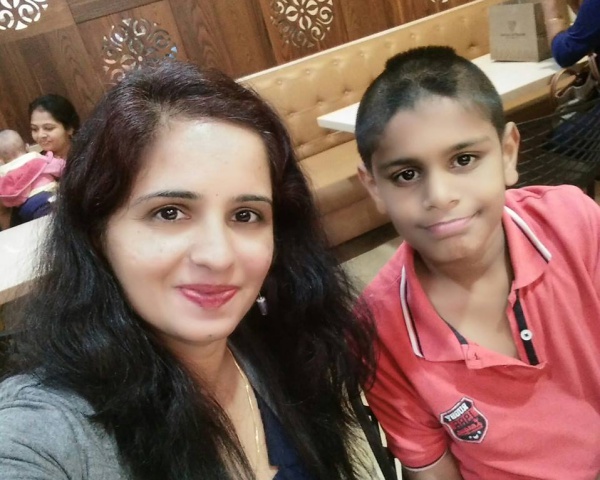 All through May, to mark the month we celebrate Mother’s Day, we bring you stories of mothers with disabled children who embody the fighting spirit inherent in every mother. We kick the weekly series off with the story of Advait and Smrithy.

From wooden and glass beads to intricate silver pendants, Advait Rajesh’s hands string together the most stunning jewelry pieces using multi-coloured threads. Addu, as he is popularly known, started showing his artistic bent at a rather young age, says mother Smrithy.

“Even as a child, he loved working with thread. Many children on the autism spectrum tend to get obsessed with one hobby or habit, and thread work was Addu’s favourite.

Smrithy realized that working with thread was a passion close to her son’s heart and she decided to find ways to make it meaningful. That’s how the idea of making jewellery was born.

Addu’s creative skills became famous when for Teacher’s Day, he designed some jewelry pieces for his teachers in school. “I gave him some beads and patterns and asked him to make bracelets as gifts for his teachers. They loved it and that led to Addu making them even more, recalls Smrithy. .

Today, Addu’s creations is a popular page on Facebook with many people flocking to his site to look for his latest designs.

I started a page on Facebook called Addu’s Little Creations over one and a half years ago. So many people responded positively, and he started getting a lot of orders from across India and even abroad from countries like Canada and Australia. The most popular items are bracelets and trinkets like strings for spectacles. – Smrithy M, Advait’s mother

Among his regular customers is Seema Lal, founder of the well-known support group TogetherWeCan. “I bought two spectacle strings, a stole and an anklet made by Addu and I loved the choice of beads, the colours he used in particular, says Lal. “I also like the effort and skill he puts into each handpicked bead.

What makes it extra special for customers is the personal touch Smrithy adds to each purchase. “Smrithy always sends videos of Addu making the item and that gives such a personalized feel, says Lal. “She also sends us pictures of him typing our address, going to the post office and documents the whole process for each of her buyers and this makes us feel so special.

In Addu’s journey towards empowerment, also lies Smrithy’s story of personal growth. Like many parents, she reacted badly when her child was diagnosed with autism at the age of two and a half years. She had no idea of how to help him and had to deal with negativity from around her. “Many family members said I was a bad parent and that he had autism because I was devoting too much attention to my older child, recalls Smrithy. “It was a tough time and I felt guilty and unable to cope. I suffered from severe depression for one month.

Smrithy fought back and did a course in special education so she could choose the approach most effective for Addu. Her husband and older son also became a part of her journey. She learned to focus on his strengths, rather than the disability and worked on improving his cognitive and communication skills through different activities like sports.

Today Smrithy tries to empower other parents in similar situations through regular workshops.

“I was a girl from a small village in Kerala and had no idea how to cope with this challenge that life threw at me through Addu, but he was my motivation, says Smrithy. “Now do workshops to empower parents and have presented papers in international conferences. Addu has also improved a lot and has many skills now and over time, family members have understood his problems and become supportive.

Lal says she is simply in awe of Smrithy. “I know her as part of the TWC network through other parents and she has participated in my research too which gave me more insight into her empowering journey. She is helping Addu and other kids and families touched by autism.

OTHER STORIES IN THE #BEING MOM SERIES:

Scientist, Teacher, Fighter – The many sides of Pushplata Sinha


#BeingMom – What makes Nalini Srivastava such a power mom?