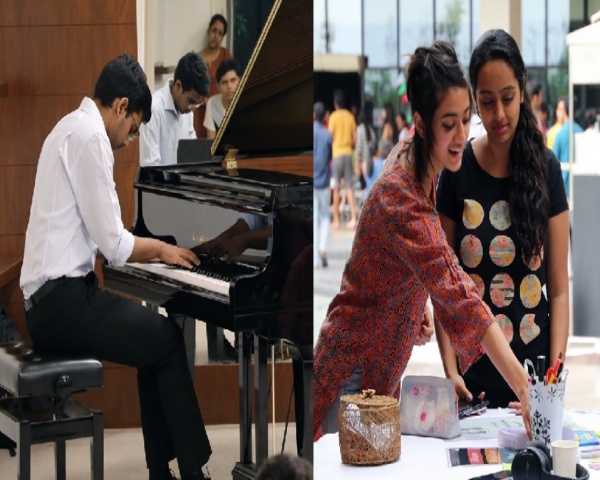 Shakul Raj Sonker was in Class 12 when he heard about Ashoka University’s inclusive education program. “There was a presentation made at my school in Kanpur by the outreach team of the University, says Shakul, who is visually impaired.

This May Shakul will finish his degree in mathematics at Ashoka University. He has received a placement in a venture fund firm where he plans to focus on data science and machine learning. “Ashoka allowed me to pursue my passion for mathematics without any hinderance and has opened a path to many more visually impaired students to pursue careers in the areas of STEM (Science, Technology, Engineering, Mathematics).

Three years after it was formally launched, the Office of Learning Support (OLS) at Ashoka University, located in Sonipat, Haryana, has witnessed a steady increase in the number of applications from students with disabilities. They are drawn by the choices offered in pursuing subject matters of their choice coupled with access to curriculum and resources like everyone else.

The numbers tell the story. In the last four years, two students with physical disabilities have been enrolled at Ashoka University, with offer letters sent to about four students for the upcoming academic session.

With respect to learning disabilities, attention deficit and autism spectrum, over last four years, we have had approximately 25-30, who had declared their disability at the time of admission and got selected too. At least 20 -25 more got themselves assessed while pursuing their undergrad or post-grad degree, and started receiving the support. Again, for the new academic year 2019, the offer has been sent out to more than 10 as of now. We might have more as our admission cycle is still on. – Reena Gupta, Director, Office of Learning Support, Ashoka University

Ashoka University, which prides itself on offering a liberal education at par with the best in the world, caters to students with visual impairments, hearing loss, high functioning autism, dyslexia, dysgraphia, dyscalculia and ADD/ADHD/Executive Function Deficits, English language learners as well as mental health concerns.

It’s among the rare few in a country where access to higher education for disabled youth is a distant dream. “Just less than 5% of persons with disabilities are graduating compared to over 25% among non-disabled, as V Rajashekharan, Co-founder, v-shesh, points out. This lack of support services in higher education is cited as the biggest reason for this glaring disparity. “Denied of this access, youth with disabilities are significantly disadvantaged in accessing employment opportunities, says Rajashekharan, whose company prepares job seekers with opportunities and organizations with disability inclusion.

This also puts several streams remain out of reach for students with disabilities. Support services like what Ashoka University is offering, he says, will help youth with disabilities achieve their educational aspirations as well as significantly improve employment prospects.

Support at many levels

“I feel Ashoka has opened varied avenues as I am getting exposure to Ivy league universities, says Kunwar, who moved from Chandigarh to study here. “I have two careers on my mind, one of them being the civil services, so majoring in sociology and anthropology are great subjects for that. I might also pursue a career in fashion as an entrepreneur so I am studying entrepreneurship as a minor and honing my skills from renowned professors

The OLS designs a support plan customised for each student seeking support depending on his/her specific needs. This is apart from standard accommodations provided like a scribe during exams, note-takers in class, latest assistive technology tools, extra time, etc.

Apart from training and sensitization sessions with various teams and faculty members, detailed, student-specific meetings are held regularly with professors who have students with disabilities enrolled in their programs.

There are, however, some challenges when it comes to reaching out to students with physical disabilities. “There seem to be few blind and hearing-impaired students in mainstream schools, says Gupta. “And even if they are there in mainstream or special schools, they either do not have the subjects of their choice or they are not college-ready, skill-wise.“

This is the other big gap that needs to be filled to ensure a level playing field for students with disabilities when it comes to higher education. “A student who manages to enter a higher educational facility may struggle to cope because special schools, where most of them would have studied, lack the rigor resulting in skill disparity. Supplemental/remedial learning options need to be made available for them to catch up with the peer group on academic terms, even if one manages to access higher education, says Rajashekharan.

What is encouraging is the response shown by students with disabilities to the support offered by Ashoka University. “We have seen a marked increase in the applications, especially this year, says Gupta. “Parents write to us seeking details; they come for campus tours to check for accessibility of the infrastructure as well as the curriculum.

Hopefully, Ashoka University’s success in unlocking the potential of disabled students in higher education will encourage not only more universities to offer similar support systems so that disability is not a barrier for anyone from entering university life.