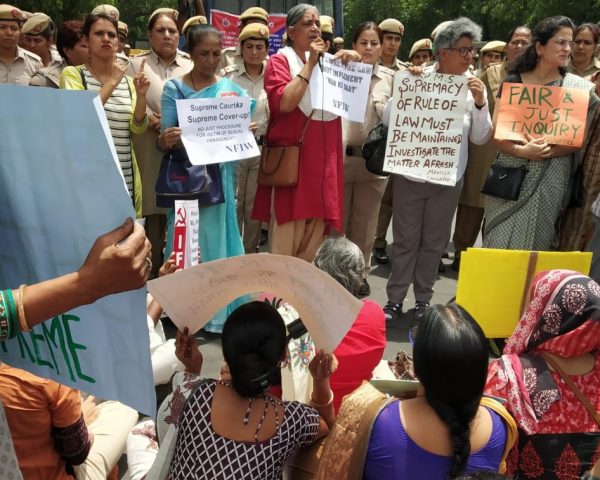 There is growing outrage on social media and on the streets over the clean chit given to the Chief Justice of India, Ranjan Gogoi in a sexual harassment case. An in-house panel of three Supreme Court judges held a meeting behind closed doors and declared him not guilty.

The complainant is a former employee of the Supreme Court who sent an affidavit to all the judges of the court last month claiming that she and her family suffered after she did not respond to the inappropriate advances made by the Chief Justice.

The complainant, who is hearing impaired, had requested that a person be allowed to be present at the hearing with her as support. But this was denied. She has accused the committee of being biased.

The move to clear the Chief Justice has been slammed by many activists and disability groups across India. “I was extremely shocked to know that a lady working at Supreme Court faced this harassment and the judiciary is not ready to go by proper legal procedure to give her justice”, said Kolkata-based disability rights activist Shampa Sengupta. “Then I came to know that the complainant has a hearing impairment but reasonable accommodation was not provided to her during the enquiry procedure. My instant reaction was if disabled women are not safe in Supreme Court, where will they feel safe in this country? Our struggle should be intensified so that justice is delivered.”

According to various reports, the 35-year-old complainant has alleged that the sexual harassment took place on 10 and 11 October last year. In her affidavit, she gave detailed documented proof of the harassment she and her family faced.

Various concerns have been raised about the procedure and the manner in which the enquiry was conducted. All these lead to the creation of a perception that something is being hidden and indeed some wrong has happened. That the Supreme Court itself is violating standards set by it is unprecedented. The faith of the people in this last resort of justice is shaken. Apart from all other procedural lapses, the fact that the complainant, a lady with hearing impairment, was denied support and accommodation as provided for in the RPWD Act condemnable. – Murali Dharan Vishwanath, General Secretary, National Platform for the Rights of the Disabled

Activists say the enquiry has violated the provisions given as per the Vishaka guidelines as well as Prevention of Sexual Harassment at Workplace Act. On Saturday, a massive protest was held in the national capital which saw women’s rights and disability rights activists present as well as college students.